I read once that a reviewer should ask themselves three questions in considering a book, 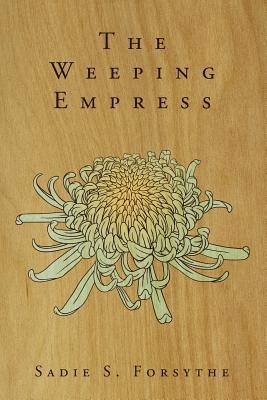 In other reviews and books I have been swept along by story, character and language and that has been the thrust of my reviews.  I have pondered on what did the book leave me with after I had turned the last page.  However, with The Weeping Empress I found myself more often than usual trying to discern the author's guiding hand and to get some sense of where the story was going and what it set out to achieve.  This is not to say that that is a bad thing, just that this was a story that, in some significant ways, strayed beyond the envelope of my normal reading experience.

It is a self-published book and I came upon it by chance. A comment on one of my reviews of another book, led me to the author's blogpost, her review of the same book and a scanning of her other posts and at the end of it a why the hell not? let's read her book.

I had gathered that the story of Chiyo was written after the author had had her first daughter and that the powerful feelings engendered by motherhood were a significant part of the context in which the book was conceived.

Chiyo is a woman, wife and mother from (I am guessing) contemporary America, who awakes on a grassy hillside in a different age and place thrown into the middle of a horrific slaughter of old and infirm travellers.  She joins with two differently enigmatic swordsmen and with them carves a trail of violence through an oriental landscape and culture.  On the way she confronts an emperor and is in various ways challenged and supported by a religious order the Scaredisto.

The story raises questions for the reader and for Chiyo.  How did she get here? Why was she brought here? Will she ever get home? And those questions don't really start to get addressed until over halfway through the book when the women of the Sacredisto begin to unravel some of their serpentine beliefs and mythology.  Ultimately Chiyo's fate is wrapped up in the darkest secrets of the Goddess's will.

The culture is immediately recognisable as Japanese, before the word katana is even mentioned.  Having written and read mostly in the pseudo-medieval tradition of much of western fantasy, it was refreshing to burrow into a different setting and the author's love and knowledge of the milieu is clear in aspects ranging from her description of the different parts of a sword to the precision of tea ceremonies.  There is even a glossary of terms.

The other element that came through for me is rage.  Chiyo is angry, angry at pretty much everyone and everything and that seems to fuel a bloodlust which (from a glimpse at other reviews) is something some other readers struggled to come to terms with.   There is despair, a constant backdrop of betrayal and distrust as she writhes like a snake against the sense of being manipulated by one faction or another.

It seemed to me that the whole story is a merging of two great affections in the author's life into a single "What if..." question.  "What if a woman like me were plucked from the loved and loving bosom of my family and transplanted into a cruel feudal landscape with little hope of return?"  In such a story the nature of the central character's feelings must take centre stage, they are the engine and the heart of the story.  And it is an exploration of that individual diaspora that I took to be the author's intent - the thing she set out to achieve.  The other elements of the story serve as satellites to that central ambition.

There is then the question of how well was it achieved?  Well, in vision our eyes have a foveal patch. A place on which our retina has a concentration of cells to detect fine detail - the sweet spot in the eye if you like - where we focus our vision while around it the objects in our peripheral vision is necessarily less detailed and precise.  Forsythe's foveal view is firmly focussed on Chiyo and I felt the surrounding political and revolutionary context in which Chiyo and her two close male comrades operated, lacked a degree of detail needed to make it fully credible.

The trio wondered around relatively aimlessly attacking government troops, outposts and convoys with little sense of a strategy beyond causing trouble, and little sense of an opponent beyond the greed of an emperor led establishment.  However, they seemed reluctant to offer any alternative world view beyond killing guilty and presumably the innocent.  The two men that Chiyo teams up with seem to be as fuelled by incontinent rage just as much as Chiyo herself does.  Though there is some development in their feelings towards Chiyo, almost to the very end neither seems to have progressed much beyond a desire to kill and a oft expressed surprise, which I had to share at times, that no-one had yet killed them in return.

There was a point, at the end of Chapter two, where the plot took a twist that had me stunned- disbelief seriously unsuspended.  The sword wielding pair, having exerted considerable efforts and exposed themselves to some danger in the cause of a battered group of refugees, then displayed to me an illogical degree of callousness.  It was not so much that it denigrated the value of the refugees, but that it denigrated the value of their own previous efforts on the refugees' behalf.

The mysterious sect of the Sacredisto moved to centre stage in the final third of the book. It was here I found myself trying to untangle the puzzle the author had laid.  I tried to tease out what  storyline there was beyond Chiyo's angry despair at the dislocation in her life and the revenge she delighted in taking on any who crossed the path of her katana.  There was a message in the naming of her sword Salvation for it was its frequent use which offered her a kind of salvation, or at least a salving of her wounded spirit.

The bizarre mythology of the Scaredisto and their Goddess twisted like the snake that was their symbol but at the end I found myself thinking this was a struggle as much on the author's part to tie off the story on which she had launched herself and her heroine.  At first I had been unsure if Chiyo had been plucked to a parallel world or a different time, and - with a reference made to unfamiliar stars - I suspect even the author may not have been.  Though it is possible I do her knowledge of Japanese history an injustice.  But at the end, like a snake eating its own tail, the tale (and tail) of the Sacredisto sealed the arc of the story and cleared the way for an epilogue that brought some closure for both reader and Chiyo.

There were points of plotting where the heroes' tactics and strategy might not have stood up to too close a scrutiny, sketchy details and slightly implausible stratagems conspiring to conveniently place the heroes where the song of the katana could be most clearly be heard and described.  There were bits of writing where the book showed its raw self-published origins, spared the sharp pen and eagle eyes of a professional editor.  But then, I am a self-published author myself and let he/she who amongst us has had no tyops be the first one to cast a stone of rebuke.

I have a fondness for female led fantasy stories, I have read a few several and have written three so far myself.  I count Eowyn and Galadriel amongst my favourite fantasy characters.  So Chiyo's story appealed where a displaced male flung into the same baffling environment could not have.  Indeed, I suspect the story could not have made so much sense without the aspect of maternal loss which paradoxically seemed to drive Chiyo.

Was the story worth telling?  It was unquestionably different, different to virtually any other story I have read and such a facet always makes a story fresh and worth of note.

Could it have been better told? It lacked a little polish, certainly. The central primal scream of the character could have been set in a more consistent background of tone, context and motive.

Was it worth reading?  Well I finished it, and I am finishing far too few books these days.  So I have to say I liked it and stars shall shine accordingly.
Posted by TOMunro at 06:34