It is funny how my reading tastes have both narrowed and broadened over the last couple of years.  Steered by the vibrant online community I am now almost exclusively reading fantasy. Yet as I dig deeper into that genre I am finding, like some fractal puzzle, that there are so many nuances of genre and style that there are always fresh discovers to be made.  Just as ancient Rome was only one city, so fantasy is only one genre, but what a city and what a genre.  And if it were ever true to say that, when you were tired of Rome then you were tired of life, so too I would aver that when you are tired of fantasy you are tired of books.

And so to my latest read - Karen Memory by Elizabeth Bear. 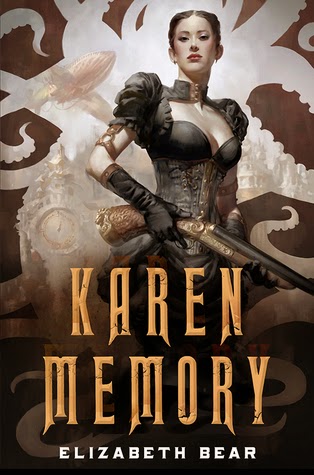 This was my first venture into reading steampunk, a world as different from Middle Earth as it is possible to imagine, yet in its imagination undoubtedly fantasy.

My only other steampunk experience was the old TV series and the 1999 film "The Wild Wild West," a re-imagining of what the American West would have been like if steam technology could be manipulated and developed.  A basic premise of cast iron machinery clunking and whizzing and banging its way into feats so akin to magic as to shame even our own silicon age.  And all this set in the rich quasi-historical context of prejudices and power, love and lawlessness that inspired a thousand cowboy films. 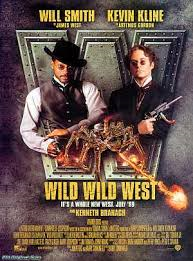 Karen Memery, the eponymous heroine is a seamstress.  I am, or at least was, sadly naïve and unworldly.  For, gentle reader, "seamstress" is a euphemism!  Others that Karen uses for her profession are star-gazer, or ceiling gazer for she is, as it were, a working girl.  And for all the fact that Karen Memery lives in a bordello with a rich and eclectic mix of fellow ladies of the night, there is no prurience in her journal.  For that is what this book is, a first person account of a key few weeks in her young life.

The book is carried beautifully by the authenticity of Karen's voice, speaking directly and matter of factly to the reader.   She shares her hopes and her fears, and there are plenty of both, with blunt truth and a sharp turn of phrase. She is, in all ways, a protagonist worthy of your attention.

The story begins when a quiet evening, waiting in the parlour of Hotel Mon Cherie for clients, is shattered by two runaways and their far from savoury pursuers.  Events twist and turn as Karen and her companions are swept along by a tide of corruption, murder, and sabotage as the story touches on great civic affairs and even matters of state.

Karen's voice rings consistently and convincingly true, whether she is explaining the tragedies that brought her to a brothel, or describing the simple yearning for another's kiss.  It is a pleasure to ride in her thoughts and immerse oneself in her life.

But, as powerful a leading lady as Karen is, the author does not stint on the supporting players.  Lizzie, Madam Damnable, Marshal Bass Reeves, Miss Francina, and so many more are all uniquely drawn with economical prose and a rich palette.  The story jerks back and forth as calumny is piled upon calumny, there is a villain and he has a plan, and there is another villain and he has a savage streak and in the midst of it you fear for Karen.

And then there is a sewing machine.  Lovely as the cover of the book is, I really needed an illustration of the sewing machine to get my head around what this fantastic piece of souped up kit was.
Not so much an overgrown appliance for the "Great British Sewing Bee" (above) as something Lieutenant Ripley might wear in an intergalactic cargo hold (below)

The story gathers pace for a sprint from the middle to the end, through a series of higher and sharper peaks to a fitting final denoument. Satisfying as that it is, it is the flavour of the book that makes it impossible to put down.  The feeling that you are sitting next to Karen as she recounts her life without an ounce of the self-pity she could so easily be forgiven for, and with a wealth of respect for others you cannot help but warm too,  While there are many falls along the way, she is as far from a fallen woman as you could meet.

Diversity and the Hugos storm.


I have not ventured into the Hugo debacle much. I like my puppies happy and healthy and more worthy voices than me have competed to examine the entrails of the awards process and then fling blame at the other side for their evisceration.

Like any complex story nobody can know everything and everyone will find some nugget of information (which may or may not be accurate) that the other side did not know, and use that ignorance to claim they have proved the other side wrong.

However, Elizabeth Bear has twice won Hugos for short fiction, and I guess she is the kind of writer who might have inspired a degree of rabidness in those who felt that a left wing liberal agenda had somehow hijacked the awards process.

I'm making that guess because Karen Memory includes a wide range of empowered people from usually marginalised and disadvantaged groups.  In addition to a female lead who is also a prostitute, people with disabilities, people of a wide variety of races and religions and even a man who dresses and turns tricks as a woman, are all given a glowing place in the limelight, while the main love story is between two women.  And for some I suppose that must feel wrong, for them fantasy heroes should only ever be white males wielding swords because that is how it used to be (?)

Well, fuck 'em, this is a damn good story.

Teresa Frohock once commented on a discussion she'd had with a gay friend about how to best write gay people in her work.  The answer she got was "Write them like normal people."  And that is what Elizabeth Bear does beautifully.  All these different people are defined by their humanity not their marginalising characteristics.  These are not tokens flung in to fit some quota of representation. The story is woven inextricably around the totality of who they are.  And it is a good story about great characters who happen to, in many significant ways, not be sword wielding white hetrosexual males.

I have watched and chipped in on online debates about whether fantasy is properly representative of society either in its writers or its stories.  My own view is that nobody should tell an author what stories they should write, or accuse them of being objectively wrong for who they did or did not include in their story.

Authors must write the stories they want to tell filled with characters they want to tell us about because they are interesting characters.  At the same time the debate, like every experience, changes those who participate in it.  In time it may change the stories that authors want to write, certainly my work in progress is different to the history raiding epic fantasy I started ten years ago. Contemporary horrors provide a more present and bitter inspiration.

However, at the heart of it all, the story is the thing and Karen Memory is proof you can have a cracking good story where diversity is natural not forced, celebrated not stereotyped, built in not bolted on.

I have a fondness for bad-ass empowered female characters.  Eowyn in Lord of The Rings, Lyra Belacqua in His Dark Materials, Grada in the Tower and Knife trilogy.  I featured four of them in my own trilogy, including a Medusa.  But I worry about writing women. Do I get it right?

I can follow the tenet of Teresa Frohock's friend and just write them as people. Indeed that is what I try to do. The motivations and the emotions are not so totally different, or at least there is considerable overlap where the variation within each gender is greater than the variation between their respective means.

When I read Karen Memory, littered with the small scale authenticities of what it is to be female, I find my own experiences wholly inadequate to capture that reality.  Don't get me wrong, Karen's digressions into hair braiding and seam-stressing (of the needle and thread kind) are few and far between.  Her axe wielding ass-kicking action sequences are ones more familiar to my imagination. They are also less open to dispute from a discerning readership who, in all probability, have kicked few asses and wielded fewer axes

But is there a challenge in men writing women?  Is there a tendency, or at least a temptation, to fall back on familiarity and make their female characters into blade swinging action heroines?  Is the devil in the detail - or perhaps the absence of it?  Is there a complementary challenge for women writing men?

I read Joe Abercrombie's Half the World, where centre stage goes to a ferocious teenage girl called Thorn.  I liked the story and I liked Thorn, but she was a character who sought to succeed by adopting traditionally male virtues of warrior skill.  Does such fantasy risk offering a sterile vision of how women succeed by adopting male attributes?  What does that say about gender balance? Is Thorn the fantasy equivalent of a suited and booted female CEO bestriding the boardroom by out-male-ing the males?

These are not rhetorical questions, so much as an expression of doubt and angst at how truly I have written my female characters, an angst thrown into sharp relief by the quality of Elizabeth Bear's writing.  I guess I should take comfort from the kind reviews that I have had on both sides of the gender divide.  Women who have followed Niarmit, Quintala, Hepdida and Dema through half a million words and 1700 pages have loved the story.   The minority of reviews which were negative, have made no made no complaint about my representation of gender, so much as launching sharp eyed pokes at grammar and editing.  (However, even traditionally published books have their flaws, with Karen at some point in my kindle version raising a clenched fish, which made me smile.)

I spoke to a blogger recently from hummblebee.wordpress.com about this frequent quandary I find myself in. We also talked about "The Time Traveller's Wife" by Audrey Niffenberger, one of my favourite books.  My fellow blogger said that Claire, the female lead, was the least convincing part for her, poorly sketched by Niffenberger. So in one person's opinion at least, being female is no guarantee of writing females any better than the next man.  And that will have to be my comfort through my next few moments of authorial angst, as Karen Memory's voice echoes around my head.