Scourge of the Betrayer by Jeff Salyards - a spoiler free review

Another book that kept me reading by the backlit screen of a kindle into the small hours of the morning in a hunger to see how the story ended for characters in whose fate I had become deeply invested. 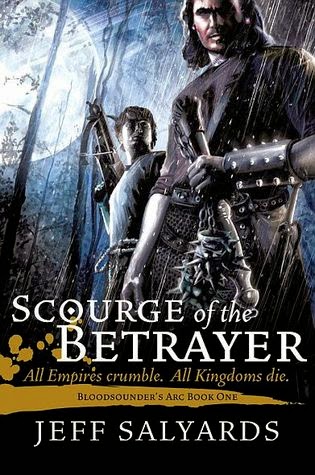 I read it all, including the acknowledgements, which for some is like eating the entire apple, core included.  Within those last pages of author's gratitude and insight one line stood out where Mr Salyards thanks his agent "for believing in fantasy more intimate than epic" and that sense of close confinement with the protagonists rang true to me as one of the book's major accomplishments.

The blurb sets it up, our first person narrator is Arkamondos a scribe, a recorder, that Captain Braylar Killcoin is obliged to hire to note down the deeds and doings of his troop of Syldoon soldiers.  I had read some comments about this arrangement on Reddit, the slow sense of reveal as the reader rides in the mind of the scarcely trusted supernumerary and is kept in as much ignorance of his employer's purpose, though that does not stop him or the reader trying to guess at it.

This is an astonishingly rich book, in that there is much I would like to say about it and am slightly at a loss for where to begin.  So I will pluck another book out of the air for comparison. 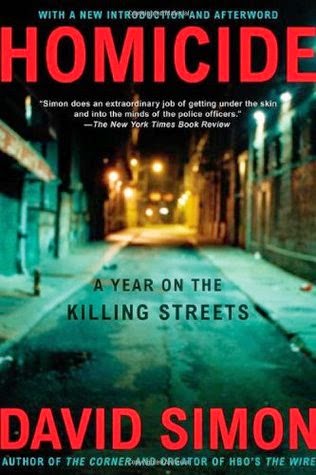 It is "Homicide" by David Simon a journalist who documents the year he spent shadowing the detectives of the Baltimore homicide division as they dealt with upwards of 200 murders.  While Simon remained far more in the background than Arkamondos and the detectives of Baltimore were far more virtuous than the foul mouthed and quick bladed Syldoon, there is that same sense of an outsider faithfully documenting remarkable individuals routinely dealing with exceptional challenges.  As Salyards' story develops Arkamondos takes on a more active role in the doings of the Syldoon, partly from self-preservation but gradually from a sense of respectful belonging to their tight knit little community, until Braylar proclaims he is embedded.  The journalist Simon certainly never took up arms in the way Arkamondos is obliged to do, but he did admit to one point where he had become so embedded that the hard pressed detectives riding with him told him to pat down one suspect while they dealt with two others.  I thought of that moment as I read when Arkamondos is hesitantly waving a crossbow in the general direction of a clerical prisoner and trying to assume the brusque commanding manner of his employer. 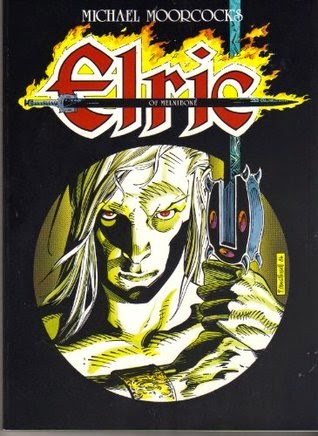 A second comparator is Elric of Melnibone - a book I read in my teens and of which I remember less than perhaps I should, for such a classic work.  However, not since Elric called the sword Stormbringer to him, have I read of a weapon like Braylar's two headed flail "Bloodsounder."  I was first struck by the inventiveness of giving your primary warrior a flail as his weapon of choice.  I haven't seen such preferment since my AD&D days when the flail's greater damage (d6+1 as I recall)always lead me to pick it over the mace for my priest characters.  Bloodsounder dictates the battle, no longer a matter of the simple cut and thrust, or hack and slash of a sword.  Salyards describes in careful detail Braylar's use of this fearsome weapon and in so doing introduces new dimensions to traditional fantasy combat.  However, going beyond the novelty of a flail, there is the dark curse within the weapon that brings out the parallels with Stormbringer.  This is a weapon which enslaves its wielder just as much and as often as it delivers him. 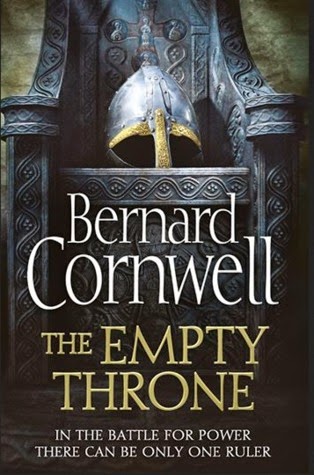 A third comparator is Bernard Cornwell's Saxon series, for that is the only other place where I have seen such gritty realisation of the grim truths of battle.  In Salyards' battles, armour works.  For many fantasy novels swords slice through plate mail so easily you can see why the heroines of old foreswore anything more substantial than a chainmail bikini as a waste of effort.  However, when it comes to the hack, cut, thrust, stab, slash, gouge, wrench and grapple of Salyard's battles we see the purpose, power and limitations of all that ironmongery.  Soldiers are bruised, bones are broken within their steel shells, but still they limp and stagger on, for what other choice do they have.  They do not throw off their battle injuries with the passing of a single night.  Fought to a standstill, they stand still but only just.   You feel the blows and share the grief - it is in truth an intimate more than an epic experience. 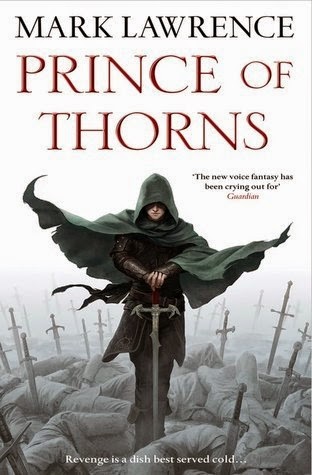 Which brings me to a fourth comparator, Prince of Thorns.  For in Braylar Killcoin we have a hero in his way as suspect as Jorg Ancrath.  We see Braylar through another's eyes, a gaze tinted with suspicion and distaste and, like Arkamanodos, we find ourselves questioning his motives and his morality.  Like Jorg, Braylar is a product of his past but his is not one of privilege.  The nature of the Syldoon put me in mind of the Janisseries of the Turkish Sultans, and to a lesser extent, the French Foreign Legion.  These are foreigners inducted, enslaved, indoctrinated, inculcated, in short brainwashed into the service of the Empire that was their people's enemy.  In so doing they are turned into a most formidable fighting force.  Braylar, for all his battle prowess, is no knight in shining armour and like Jorg he is surrounded by a disparate following of individuals exploring the full spectrum of unsavoury.

And for a fifth comparator, well I have plucked a book I never read from the shelves of Goodreads.  For the workings of the Syldoon troop under Braylar's command remind me of what I have heard of CIA operations in South America.  Braylar has his orders and his outfit is one whose work would doubtless be denied and whose Emperor might forget ever having ordered them to do anything, should certain matters come to light and ever reach so far as an imperial hearing of senators.  This is a small dirty outfit involved in a small dirty war that hasn't even been declared.  As a reader you fear for them in their isolation, and you understand why their trust does not stray beyond their own circles and only slowly encompasses their reluctant scribe.

In a recent facebook post Salyards observed that while still proud of this book, there are some aspects that hindsight told him could have been done better.  It is only natural for we are all growing as writers and I do wonder what changes he would make.  My own guess might be one scene that was a little uncomfortable both for reader and for our first person hero the scribe.  Daniel Polansky, in his own acknowledgements on The Straight Razor Cure, thanked the advice that saw him delete a sex scene which was neither necessary nor appropriate to the story.  Maybe Salyards too, felt that there were certain intimacies that would still have served their purpose with a less detailed exploration in his intimate rather than epic fantasy. Or perhaps it was another aspect of the work.  Truly there is little to fault in this piece which magnificently achieves what it set out to do.

There is a mythos and world building aplenty in this book, and the rich world Salyards has set out could easily support a long sequence of stories: allusions to gods labelled deserters for their abandonment of a failed humanity; the mysterious origins of Braylar's fearsome weapon; the destructive lure of the misty God's Veil.  There is so much to admire.  The characters, revealed only through the scribe's assumptions and their own dialogue and actions, are all rich and compelling.  Each person speaks in an authentic and individual voice, and we truly feel we are there in that grimy smoky inn, as far from the Prancing Pony at Bree as it is possible to be.

In short, Scourge of the Betrayer, like the diabolical Bloodsounder flail itself, is pretty hard to put down.
Posted by TOMunro at 07:51