Grim Gathering II, aka "There's a queue outside a f**king bookshop" 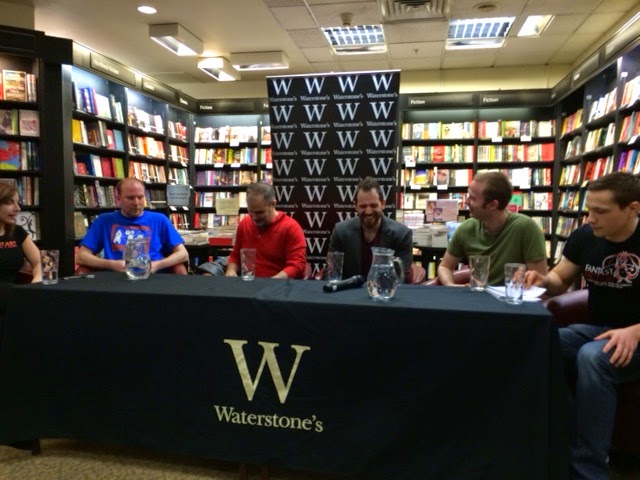 Meeting with an audience of staggering breadth and unrivalled passion
(Fortunately I corrected the typo "staggering breath", before I hit publish this post)


At the last grim gathering, in London, the shop's opening hours seamlessly merged into the evening event with browsers transforming into gatherers at the witching hour of 7.00 pm.  But for this occasion in Bristol, there was a hiatus between the shop closing and the gathering opening.  When I arrived at 6.15 there was a queue of 1, patiently reading what looked like a broken empire book. While I stopped at the neighbouring cash machine for some cash, the queue grew to 5 and within a few more minutes it had stretched down the street.  One bike riding local passing by the scene felt obliged to exclaim his expletive seasoned bewilderment at the sight of a queue outside a bookshop. Possibly he thought "bookshop queue" was an oxymoron.  Our own thoughts on him went unrecorded.


Ushered in we seized our seats, 6th in the queue was still good enough for a front row seat in the "no allocated places but everyone being terribly civilised" world of grimdark fandom.  We waited for mein host, his co-hosting sister and guests to appear.  The event began with a birthday tribute and record of our appreciation to Harper-Collins UK, 20 years old today, supporter of the grim gathering event and proud publisher to our panel and sundry other greats of modern fantasy.  Then it was the introductions round in which the points (IMHO) were split between

Peter Brett for admitting how he was willing to be educated in the subtleties of English bread products (Scones and crumpets in particular) in exchange for the opportunity to get into Mark Lawrence's house and cadge an electronic copy of the latest broken empire book.   Interestingly Peter has someone to read books for him, or at least to read through his daily mountain of ARCs and give him the nod as to which might be worthy of his eye.  Prince of Thorns we heard, was not exactly a recommendation from the assistant so much as an extreme reaction, which prompted Pete himself to investigate and to find he loved not just the quality of the writing (as his assistant had) but also the whole reading experience and from then on, he was Jorg and Broken Empire all the way.

Peter Newman admitted he had been briefly wracked with nerves as the newbie facing the herculean task of introducing the giant of Grim, Joe Abercrombie.  However, he was extremely relieved at the relatively modest level Joe had set the bar at with his own introduction of Peter - presumably a deliberate ploy to put the new kid on the block at ease.


The questions explored a range of issues and themes, and time and my memory can only serve to give a flavour of them below.  Along the way, Joe confessed that he had been advised by one curmudgeonly colleague that the best approach to panels was to automatically disagree with the question.  Espousing that fine tradition, Mark disputed the suggestion that there were any demons in his books, but for the purpose of that particular question, zombies and neromancers were loosely brought into the definition.  Mark also was surprised that no-one picked him up for his deliberate mis-pronounciation of hyperbole (hyper bowl, rather than hyper-boly) However, perhaps he had forgotten that we had seen him on face-book deliberating over not just which T-shirt to wear but which sharply edged award to bring.  A man with two axes and a stabby can say hyperbole any which way he pleases.

It was fascinating to hear the authors' accounts of how they write.  Four authors, four different approaches

There was an audience question as to whether the authors ever became so attached or invested in their characters that they wanted to save them from a pre-planned death or other disaster.  The answers, given the nature of the gathering, were uncompromisingly grim.


Another question was around the definition of Grimdark and what a particular proposed definition might mean in the context of each author's work.

Precision was difficult to achieve on this one.  One might have hoped that Joe, as Lordgrimdark himself would have the definitive answers, but Joe seemed to feel it was a label of convenience used by different people to group books that they either did or didn't like.  It was a term which none of the authors felt was particularly useful or valuable and a definition that risked being so broad as to potentially encompass any story that had conflict and realism in it.

"Darkness" was assumed to encompass - the lack of certainty of success, of the "good guys" winning and restoring the status quo, the transformation of endings from "happy ever after" to "not really happy and probably not for very long either"  On that benchmark Joe pointed out that most zombie apocalypse films and horror films are firmly on the 0/100 for happy endings - everybody dies, horribly, while his own books he would have put at 25 to 30.

Peter Newman took the chance within the detail of the question, to tell us more about his own book (release date 23rd April).  He said The Vagrant is basically about a one parent family struggling along in a post demonic apocalypse - sounds pretty dark and grim, (I'm 80 pages in and recommend it heartily - I hope to get a review out before the 23rd April release date.)

Oh the queues they did form as the authors patiently signed away and posed for photos. 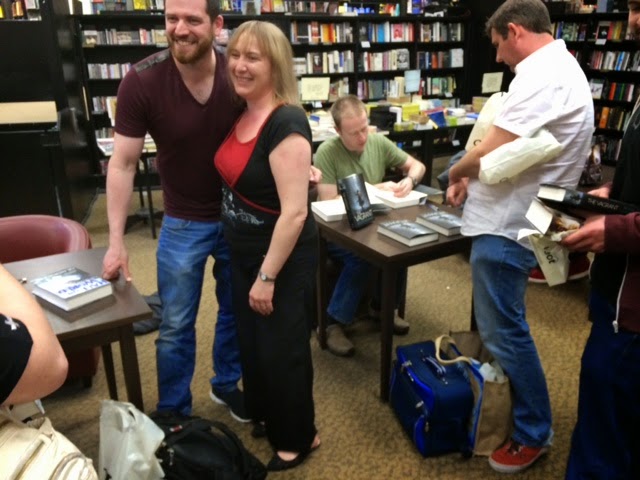 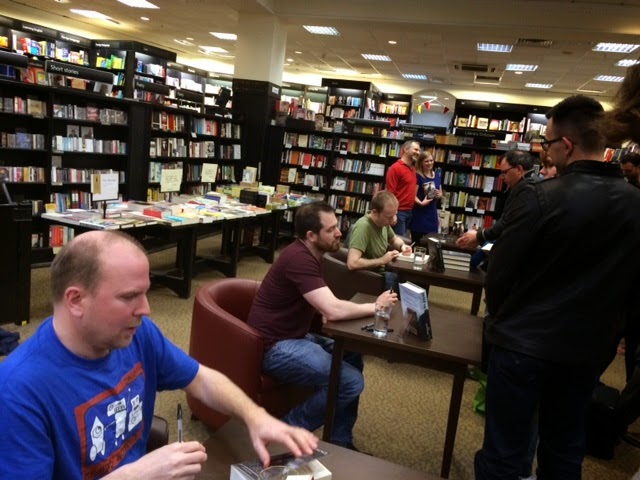 There was also a chance to chat in and around the queues.  For example to find out about Marc Aplin's dragon.  As somebody who has a significant reptile (a chameleon) in my current work in progress I was curious about reptile husbandry and whether they could show affection.  The discussion settled down to deciding that dogs had owners, cats had staff and small reptiles have bodyguards.

We adjourned to a local hostelry and drank and chatted into the night.  Besides the illustrious panel, we had a lot of writing interest and enthusiasm amongst the audience.

There were the many Fantasy Faction staff contributors meeting up for the first time.  It felt like a network of cells in the world war two French resistance were finally coming together and putting faces to what had only been morse code call signs before.  There was a strong voice (voices) calling for fantasy faction T-shirts for staff - or to be purchasable.

Amongst those fantasy faction staff members there was a journalist, self-published authors and also in Lucy Hounsom  a traditionally published author whose debut novel "Starborn" shares a release date (23rd April) with Peter Newman's "The Vagrant."

I feel Lucy is particularly deserving of a mention as, when she proudly showed off her author's copy of the book I asked on an impulse if I could have it (I do like to get my hands on a book before its release date - and just in case you're listening GRRMartin and Pat Rothfuss, please take note), and then even asked her to sign it.  I'm on page 85 and enjoying it and I definitely owe her a review for my sheer cheek in asking for the copy that was destined for her very understanding sister. 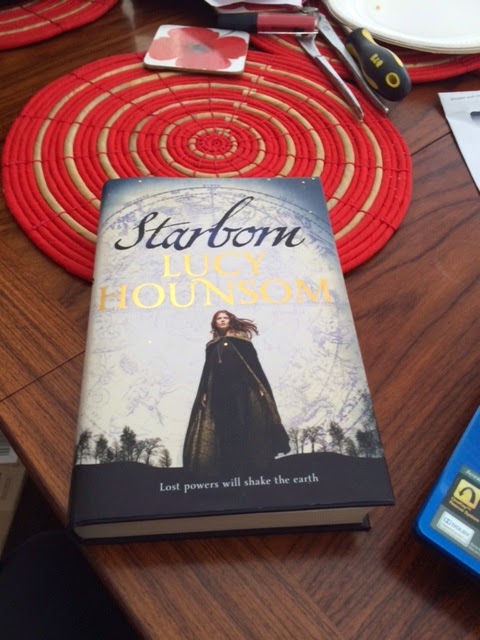 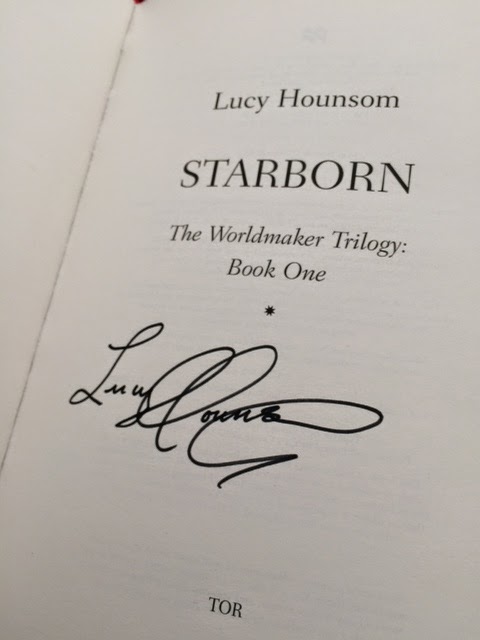 Conversation ebbed and flowed around all things writing.   If you love reading then you are more likely to want to turn your hand to writing as well. We talked about the self-published fantasy blog off, Mark Lawrence's inspiration as a way to get some access to blogging air-time for the many self-published authors out there.  Geoff Matthews' "Stone Road" for example has been experiencing a bit of a boost from a positive review by Sarah Chorn at Bookworm blues.   Hey people, reviews count.

It was late when people were finally forced out of the bar and began to navigate their way to various hotels across Bristol, or in my case - the airport.   But a pleasant evening had been had by all - a chance to hear some great authors, to talk to them in person, like real people, and to talk amongst ourselves about our shared enthusiasm for fantasy books with people who know who Locke Lamora is, who have heard of Ursula le Guin, and who think that fantasy really can and does tell us more about real people than it tells us about magic swords. 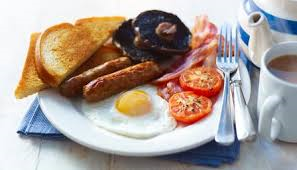 I am sure it was lovely, maybe even still is being lovely.  But you will have to read another blog to find out about that because I had a plane to catch and am not at all twitter and bisted about missing out. 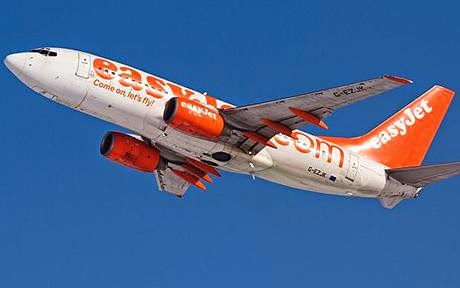