"The Stable Vices Affair" A review of G.W.Renshaw's debut novel

"I have now narrowed down the reader demographic of my first novel.
It officially appeals to women between the ages of 12 and 74."

Fortunately he subsequently admitted " ...several men have already read and enjoyed it"  so, presumably somewhat unofficially, it is o.k. for me to have found the book both appealing and enjoyable. 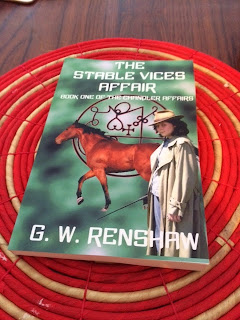 The story weaves two threads together in a compact 250 page volume.  The opening scene is of a radio interview with our heroine Veronica Irene Chandler which does not go entirely as she had hoped.  The back story thread leads us up to the point at which she became the eighteen year old Calgary Private Investigator whose career choices and qualifications are robustly challenged on air.  The forward story thread carries on with her acquiring and pursuing her first two cases.

Before this, the short prologue had ended with the enigmatic line  "Personally, I blame most of my problems on that damned dwarf.  And the aliens, of course."

I spent the first quarter of the book waiting for the aliens to turn up in their silvery spacecraft and the next half thinking "oh - the aliens are in her head, it's just a metaphor."

The back story shows us an engaging string of episodes in our heroine's life from early childhood to graduation as a qualified PI.  Those who read my reviews, or even my own books, will know I have a fondness for kick-ass heroines, and Veronica Irene Chandler is certainly one of those.  There is the luxury of being an only child to caring but broadly sensible parents.  But even a supportive home is no protection from the cardinal high school sin of being different, of wanting something out of the ordinary.

But despite that, Veronica forms firm friendships and as a reader I found myself cheering her on through each trial and tribulation and some of them are quite traumatic.  Nonetheless the author's narration is spare and factual -  showing action and reaction both credible and authentic.  It is in reading the back matter of a book that you discover things about an author which make you go "oh... so that's why..."  For example the fact that G.W.Renshaw is a martial artist explains the believable manoeuvers by which Veronica defies physical disadvantages to punch significantly above her weight.

Some of Veronica's friendships are with people of her own age but of the male persuasion and, in that respect things develop as these things tend to do on her journey through adolescence into adulthood. When queried about whether there were naughty bits in his book, the author replied

"As far as naughty bits are concerned, that depends on your definition. There are occasional sex scenes, but they concentrate on the participant's thoughts and feelings rather than the mechanics. There are also references to kink, but it's a plot point rather than titillation."

This is a pretty fair assessment.  There are several references to sex, more so than I have seen in many of my recent reads.  But the references are about its anticipation and its aftermath and Renshaw manages to conjure a convincing image of a young woman with perhaps slightly more than her fair share of adolescent urges but without ever descending to prurient detail.

The heroine also has a love of research and this is perhaps where the author's interests manage to merge fairly seamlessly with his character's.  There is a love of cooking, there are details of Canadian police procedure and Columbian culture, all serving to flesh out the story with colours drawn from the palette of the author's own experiences.  There is no harm in that.  I assume it was Elizabeth Bear's own detailed knowledge of horse husbandry which enhanced my reading of Karen Memory.  I dare say that a profound knowledge of designer shopping made 50 Shades of Grey a more credible read to those who delved into its reportedly shallow depths.  As to the goings on in Christian Grey's Red Room, well I can make no judgement as to how true to life or well researched they were, but can only say that the stable vices briefly glimpsed in G.W.Renshaw's work would turn even E.L.James' hero a paler shade of grey.  Suffice to say there are some scenes that are not for Public Eyes.

The forward story thread follows Veronica's investigations into a pair of people caught up in some quite atypical behaviours, inexplicable even to one used to the betrayals and injuries that one human can inflict on another.  There is resolution of a kind for all the victims in this story.  However, the need to weave the back and the forward story together in a relatively short volume means that the forward story falls short of the absolute resolution that a purist might have hankered after.  Indeed, at one point I was worried as to how far the author was going to leave me hanging by my fingernails on a fearful cliff-hanger of an ending.

In the absence of the convenience of an amazon kindle version I had resorted to buying the book in a physical paperback.  Watching me read it over a short week, my wife was struck by the cover and I would admit that this is arguably the book's weakest point.  While it definitely shows the key elements of the story even down to Ms Chandler's oft mentioned extendable baton (no sniggering at the back there) they are somewhat jumbled with the horse floating in the air.

Others may feel the same, but I would only say do not judge a book by its cover, or at least not this one, because it is better than that.

The book declares, in its subtitle, that this is Book One of the Chandler Affairs. It is inevitably an introduction to the heroine and her snow clad milieu of Calgary.  An entertaining and well written read in its own right, but also something of a showcase for what will follow with characters from all ends of the good-bad spectrum surely set to reappear.

Does it work? Yes - it passes the simple tests
I believe in the characters (even the oddest of them)
I care about what happens to them and
I want to see how the story pans out.

Along the way it is well written with some sharply observed dialogue and a credible seasoning of detail to flesh out (but not pad out) the narrative.