It's Complicated - a spoiler-free review of "Half a War" by Joe Abercrombie.

Joe Abercrombie draws his first foray into Young Adult genre fiction to a conclusion with another performance so pacy it smacks of blitzkrieg, or at least half a blitzkrieg, 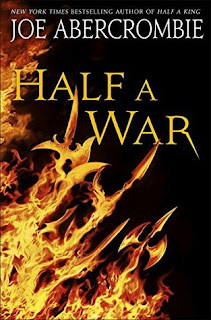 As with the second book of the trilogy there is a shift of view point.  In Half the World Yarvi faded from being the point of view reluctant heir and story teller that we followed in Half a King to being an eminence grise, the puppet master pulling the strings to forge Thorn Bakhu and Brand into key pieces for his game of diplomacy. In the same way, Thorn and Brand step out of the limelight in Half a War to let a new trio of heroes lay claim to the stage.  (Is it only me who sees an arithmetic progression in the one hero for book one, two for book two and three for book three?)

In Half a War Abercrombie gives us Skara, princess and grand-daughter of a king, yet thrown on hard times and forced to argue her case with all the political and military might that Luxembourg might exert in a dispute between France and Germany.  Still, as the title of the first part of the book attests, "words are weapons" and Skara wields them with a skill that belies her years (after all this is a young adult novel)

Then there is Raith, fierce warrior or unrepentant murderer depending on which end of his sword you are looking from. A man raised to dizzy heights at the right hand of the hard to please, impossible to satisfy, Grom-gil-Gorm.

And finally there is Koll - who we saw scampering up masts to his mother's dismay in Half the World and who is now Father Yarvi's heir apparent, committed to the ministry by duty and tempted from it by love.

With these three we can follow the complex political and military machinations of a national struggle for survival.  It is a tale well told and, in Skara we have a heroine who is no ass kicker as Thorn Bhaku was in Half the World. Perhaps that makes her more relatable? certainly it makes her different and different is always interesting.

And against them Abercrombie sets a new nemesis - Bright Yilling - captain of the High King's armies carving his way around the coast with skilful cruelty and a caustic wit.

The story swirls ferociously like a whirlpool on the Shattered Sea, toying with the reader through juxtapositions of success and failure, of threat and security, of love and despair. As the plot not so much unfolds as rollercoasters, I was left wondering at the rationale behind Abercrombie's bid for the YA readership.

Was he seeking to colonise a new genre? to invade it? or perhaps, more in keeping with the warlike Gettlanders and Vansterlanders, this was a raid into enemy territory to drag a new clutch of readers kicking and screaming back into the bowels of Grimdark fiction proper (if such a thing exists).  Certainly as the story progresses, happy endings and fine romances drift ever further from reach like a will-o-the-wisp.

This is after all a war and, not withstanding the book's title it is a total war where the stakes are raised so high no-one can afford either to leave the game or to lose it.  Battle lust and mendacious diplomacy compete to commit crimes of the most villainy and nobody's hand is entirely unstained by sin, save perhaps the fragile form of Skara and the worthy mountain that is Brand.

The love interests (for they are multiple) are complex like the politico-military backdrop.  Happy endings are for fairy tales and this is no fairy tale, even the elves -we discover - are not what we thought they were.  And when dust and lust has settled and a calm descends once more upon the shattered sea, we are left wondering how much has really changed, how much is ever changed through war? It is a grim business after all.

Individuals do not win a war, they survive it, and not everyone can survive.  And that is where the YA readership splutter their last protests as Abercrombie drags them in triumph across the border of Grimdarkland.