I treasure ARCs. Those advance review copies which can be procured by attracting attention through virtuously diligent blogging, or perhaps just by whining in the right ear like a plaintive five year old with sufficient tenacity to crumble all resistance. I leave you to guess which approach has secured me two ARCs in as many weeks. 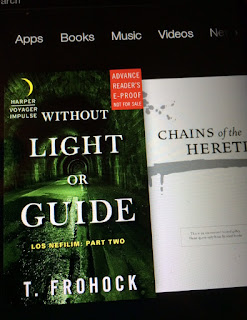 Without Light or Guide is part two of Teresa Frohock's new series "Los Nefilim" where angels and daimons do battle in the mortal realm against the backdrop of the looming Spanish civil war and with the greater horror of the Second World War casting an even darker shadow over the plot.

These are short books, purposely so.  Ms Frohock describes them as novellas and at 128 pages each, so far, they are easily digested reads.  The impression is not so much of a sequence of books rather than a series of episodes.  The parallel that sprang into my mind was "The Sopranos" though I must confess to never having seen an episode. Los Nefilim are most definitely a "family" of secrecy, power and influence - though in a more virtuous service than the Tony Soprano - and each story is a self- contained bead on a longer and as yet indeterminate story thread.

In this second outing we get more insight into the workings of Los Nefilim and the minor factions and inner strife that besets any organisation of more than two people.  Diago is set loose on his first mission for Los Nefilim, some three weeks after the events described in "In Midnight's Silence" when he is still not fully recovered from his injuries. In particular he is afflicted by chromesthesia, a disorientating dizzying condition where sounds appear as colours.  The detail appealed to the physicist in me having used pitch and colour as similes for each other through years of high school teaching.

Miquel and Rafael are the ones keeping the home fires burning in this episode, forging a tight knit family unit, while Diago struggles to prove his value and his loyalty in his new sworn allegiance. But there are those amongst his new friends who do not trust him and, to be honest, I am not sure how far he should trust them.

Lurking outside Los Nefilim are the panoply of angels, not a homogenous host in the service of a single purpose, but a group that seems to be tottering on the brink of a schism such as has split many faiths and churches over the years.   And daimons and angels alike have an interest in the unique unmatched duality that is Diago, born of daimon and angel. To some he is an opportunity for power, to others an aberration beyond trust or comprehension. It is these twin perspectives on Frohock's intriguing hero which drive the story forward.

As with In Midnight's Silence, this is a lean spare story which indulges in little overt world building or exposition.  What we learn of the world we learn through the character's words and actions and these hint at a deeper plot, a darker but important conspiracy which ebbs and flows beneath the present urgent crises. I am sure there are things of great importance which I have been told as a reader and yet whose long term significance I have missed - but then I am sure it has escaped the central characters as well.

In this episode we see more of Guillermo leader of the Nefilim and others of his kind like Inspector Garcia Los Nefilim's grumpy plant within the local police force and Suero Guillermo's trusted driver. We begin to see how the Nefilim operate and interact with the world walking alongside mortals, sometimes spying on them, sometimes steering them yet all the while as invisible as the Rowling's wizards are to the muggles of Harry Potter's world.   One might wonder at why Spain is such a nexus for these powerful agents. When angels from other countries put in an appearance I found myself asking if there were Nefilim in those countries too and did they owe the same allegiance to Guillermo that Diago did.

In "Without Light or Guide" Frohock continues to carve out a unique path for herself through the hinterland of horror with an digression towards fantasy.  There are angels, daimons and vampires, there is magic of a different type woven with music, notes turned into weapons (I can only weakly guess that they are sharps rather than flats, though my ear is too dull to tell the difference).  I am not as widely read as I would like - though one might ask (with  a glace at most people's tottering TBR piles) who amongst us is. However, within my limited experience I struggle to find a comparator, a benchmark to set Frohock's work against and say - "It is like this but with a bit of that."

And that has to be a good thing, we need works that defy categorisation for how else would we define new categories.