I'll be honest, I seized this book as a new formed Mercedes M Yardley addict.  A second read of "Pretty Little Dead Girls" left me so hungry for more I'd probably pay to read Ms Yardley's shopping lists. A quick trawl through the amazon pages threw up this anthology as the best (indeed in the midst of a publishing hiatus the only) source of my next fix. To see a novella length short story lurking in this admirable anthology of fairy tales would have been enough to lure me in to the purchase, even if every other short story in it had been Fifty Shades of Grey fan-fiction. In fact the other four stories were of an extremely high and enthralling quality so that the whole volume comfortably fitted into a working week of rather dark bedtime reading. 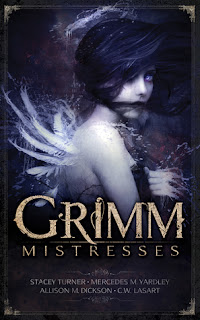 The premise of Grimm Mistresses is to have five female authors put an unconventional spin on some much loved Grimm's fairy tales.  The result is a handful of very diverse stories that are most certainly not for children (unless perhaps the child in question was Wednesday Addams). 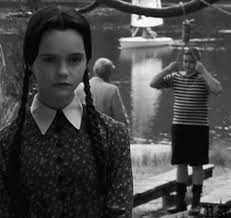 With some the original Grimm inspiration is more obvious than others - though it is possible that some picked a more obscure tale than others.  For example, The Leopard's Pelt - fascinating and well written as it was - triggered no tremor of Grimm resonance in my admittedly under-read mind - unless that is, the Swiss Family Robinson were a Grimm tale.  With all that, the stories still twist in quite convention defying ways.


But let us start with the story that brought me to this book.  "Little Dead Red" by Mercedes M. Yardley.  Ms Yardley said of the story "I think that's the darkest thing I've ever written. It was tough to write..."  This is a woman who routinely writes of serial killers, of death and mayhem all in a light lyrical prose that teeters on a tightrope above the abyss of hell.  A woman who coined a term not so much convention defying as convention defining in the phrase "whimsical horror." So if this is the darkest thing she has ever written then know it will send shivers so deep your bones will tremble for days.

That is not to say this is horrific, there is no gratuitous gore, only a glimpse of real credible people, broken people who a cruel fate has not yet finished with.  Marie is a guilt laden parent in a harrowing search for redemption at any price.  The writing is perfect.  Economical lines that build vibrant pictures in the reader's mind, images that remain long after the story is finished - burned into the retina of the imagination.  "...the flash of red Converse looking like fire flowing up the steps."

There was a film my wife and I watched once and she swore she could never watch it again.  The film was Wolfcreek, set in the Australian outback and based on true events. It centred on a very bad man and the three foolish young backpackers who fell into his power.  It was brilliantly convincing, the bad guy's contempt for humanity horrifically credible.  It was just too good at doing what it did to bear a second viewing. 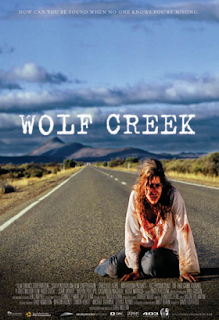 Little Dead Red evoked for me that same intensity of emotion in a story that haunts me as few others have, though I will tease and torture myself by picking at a few lines here and there and maybe, one day, I will be brave enough to read it all again.

Henry goes on an unwise double date with his co-worker Greg. The fairy tale reference begins with the choice of names and becomes more overt as the date descends into and beyond a strangely depraved disaster.

The writing conjures up the jaded faded echo of a man that is Henry.  His bleak black outlook on life bleeding out with every cynical thought we share.  "I can tolerate a friendly dinner and head home, where Netflix, the only partner yet to disappoint me, awaits." This is a man who contemplated putting a bullet in his head but in searching the internet for the best shot to take instead "became distracted enough by irrelevant YouTube videos that the idea of suicide lost most of its allure."

However, when his unusual date draws him into a bizarre kind of honey trap, he finds a desire to carve out a new life for himself, before somebody does it for him ... or to him.


This has the feel of a fairy tale, a promise extracted under duress which condemns a stranded sailor to an impossible quest.  Henry Lowry, with his ship sunk beneath him by the Japanese, washes up on a deserted island haunted by something so dark that even the trees would have fled if they could but move.

Not since Tom Hanks was Cast Away with just a painted volleyball for a co-star has a story needed such a compelling central character to sustain it, and Cambridge delivers in the person of Henry Lowry. The shipwrecked sailor is vividly portrayed in the opening segment of this compact three part story.  His childhood poverty; his love of stories heard through the charity of a kindly librarian; an unspent coin; the sadness of his last liaison before he went to war - a woman who never intended to wait for him.  A man unlucky in all ways who deserves a better chance and a better mistress than the one fate gifts him.


We are used to the wicked step mom with her dreadful daughters who persecute and enslave the poor little Cinderella.  But what if Cinderella were the step-mom's daughter or indeed something older and more primal than a mere daughter.  Neil Gaiman's "Ocean at the End of the Lane" had a charming trio of women possessed of strange powers, in communion with other worlds and in someway ageless.  They too were woman whom you crossed at your peril, but Step-mom Diane and her daughter Katie are definitely two women you would not want to fuck with.

LaSart treads the line between sex and violence with the steady footedness of many a teen horror flick.  The author darts to one side and then the other as a night heady with lust and vengeance goes decidedly tits up.


The anthology ends with another story about parenting.  Marla the graphic designer and husband Nick are moving out of Chicago together with their three children.

The town of Hubble seems at first like a kind of Amish Stepford - an abhorrence of technology and an adherence to secret ways by its leading citizens foster suspicion in the reader, if not in the lead character.  But then, as readers of such fiction, we are more conditioned to doubt, to seeing malignance in the benign, than the characters we read about.

Like a good horror story, the little pebbles of disaster are dislodged piece by piece until there is enough to trigger an avalanche and in the end, for all that she left the Windy City behind her, it is the wind which haunts Marla with its soft whispering breath.