One of the great joys in blogging is when you come across that rarest of things an ARC or Advance Reader Copy of a soon to be released book - or maybe it is just rare for me and the rest of you are all buried in the things.

So far my ARC count numbers just 3, Mark Lawrence's "Prince of Fools", Joe Abercrombie's  "Half the World" and now Graham Austin-King's "Fae - the Realm of Twilight."  The first two I won fair and square in competitions, but Graham has been the first author to gift me an ARC.  In honour of that distinction I shall launch myself with even greater alacrity to be one of the first to hit the interweb with a review.  (And, just for the avoidance of doubt and in case GRRM himself might be reading this - I would afford the same impetuous courtesy should a preview of "Winds of Winter" fall into my hands). 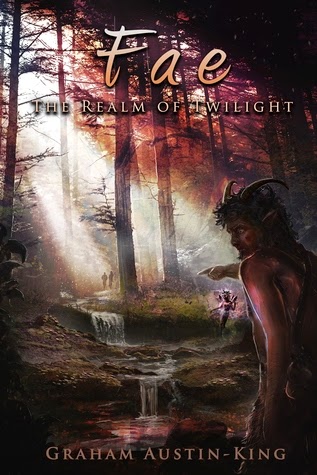 "Fae - The Realm of Twilight" is the second in Austin-King's Riven Wyrde saga (I believe it will be a trilogy)    It is a comfortable but pacy read which I devoured in a couple of days.

I tend, when thinking of a book, to try to place it and describe it by comparison with other works.  (I hope that helps others picture the book rather than appearing too much like those irritating movie moguls hearing a unique film pitch and dismissively summarising it as a one line pastiches of other films.)

For example in reading book one "Fae - The Wild Hunt" I found myself thinking of Michael J Sullivan and the intricate plotting and anti-archetype elves of the Ryria Revelations.

In this second book another couple of authors plucked a certain resonance for me.

Peter Brett's works - the Painted Man and the Desert Spear had a similar context of warring nations who do not seem to realise the need to co-operate against a far greater common foe.  Like Brett, Austin-King gives us two sides of this war within mankind and we are moved to sympathise with both sides, the battered coastal farmers and the fierce but desperate sea warriors who would take their land.

However, Austin-King also gives us a deep insight into a well developed world of the enemy - the Fae, and in this I was reminded of The Wise Man's fear, where Kvothe strays into the world of Felurian.     Austin-King's twilight world is equally strange and dangerous filled with creatures whose charm is as lethal as their cruelty. I must confess that the scientist within me at one point lead me into trying to work out the genetics of Fae pro-creation and to what extent Fae-ness might be a recessive gene.

As with the first book, Austin-King tells his story through a handful of key points of view.  In a sightly tangential opening we are swept far over the seas away from the scene of the cliffhanger climax at the end of Book One, to the city of Hesk the raiders' home, where all is not well and young Gavin picks up a desperate tale.

Then we follow others' stories, long enough in each ones' shoes to get comfortable and see each separate story line developed in satisfying depth.  There are battles described at every level from the bone crunching eye piercing horror of hand to hand combat, through the wider tactical matters of command and control and on to higher strategy and the pursuit of political ends, all described through the eyes of a variety of intriguing characters ranging across a spectrum from the old man Obair, to the sharp witted duchess Selena.

This is fantasy, a fantasy epic. And with that comes a demand for imagination from the author.  Austin-King delivers in the tantalising details of his magic and religious and world systems, eked out through character interaction.

This was a relatively quick but still eminently satisfying read that built on and amplified the tensions delivered n the first book.  My only question is how is Mr Austin-King going to save the world he has thrown into such deep and imaginative peril?
Posted by TOMunro at 17:31