When I was much younger I walked often in London and past a theatre proudly and forever proclaiming its production of "Les Miserables."   Literally for decades the show's title put me off until the film and my daughters' affection for it awoke me to its qualities.  I even went to see it live in celebration of a big birthday (I won't say how big).  There in the programme I found an echo of my early suspicions when the director had told the original cast words to the effect of, "We are putting on a musical about French history in England, with forty two on stage deaths and its got the word miserable in the title, how hard did we want to make it for ourselves."

In a similar vein I had seen Teresa Frohock's debut novel on book shelves and hesitated to lift it down.  The title - seemed at  a glance a little less than cheerful, the cover striking but a little too crusadery?  However, I am glad I did not wait as long to correct my error with this engrossing book as I waited with the musical adaptation of Victor Hugo's masterpiece. 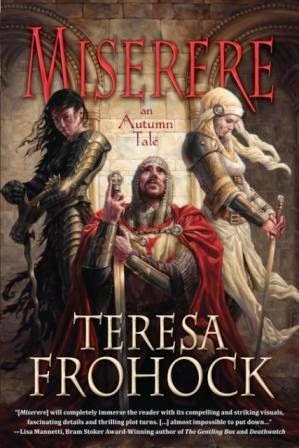 I read it in three days, it would have been two but for a headache perhaps induced by too much kindle-ing - serves me right for not buying it in hard copy when I had the chance.

It was half way through the book before I found the meaning of its title (I blame a miserable experience with latin at school for my ignorance) and glimpsed a language bridging pun on misery and miserere, very different themes that chase each other through the pages of this book.

For a debut novel it reads surprisingly like a sequel.  The three principal adult characters Lucian Negru. Rachel Boucher and Catarina share a fascinating backstory, rivaling the different adventures of Persephone and Dante in straying beyond mortal boundaries.  I wondered if perhaps the author had in fact written it all in detail, and then chosen to discard the first half in order to launch us at her characters at a key point in their tumble down the slippery slope of fate.   That is not to say Miserere suffers by the missing prequel.  It is that rarity in modern Fantasy, a self-contained book that does not abandon us at a Falls of Rauros type cliffhanger, nor demand a sequel to tie off loose-ends.  Then again, there is enough life in the setting and the characters to afford another story or two, if the author could be so tempted.

Two comparisons spring to my mind in trying to give a feel for Miserere but both have only a tenuous link to Frohock's masterpiece.   The first is the Narnia books, for they too have a parallel worlds and a christian theme and the potential for people to slip from our contemporary world into somewhere fantastically different.  However, the woerld Frohock writes of is no Narnia with talking animals and an excess of turkish delight.  It is like slipping from 1916 England into 1916 Flanders, from the untainted world they fought to preserve, to the bloody frontline in the defence against hell itself.

The second comparison is with Kirstin Cashore's Graceling books, for a select few in her world were special characters (denoted by unmatched eye colours) with powers whose nature only become apparent over time.  So too people who are enabled to slip from Earth into Frohock's Woerld have special powers which can be nurtured and can aid in the fight against the denizens of hell.  For example the hero Lucian Negru has the power of exorcism and the power to open gates - doorways - into hell itself.  Other people who have crossed the divide have different powers - but all of them valuable to the righteous and a target for the damned.

The book opens with its hero crippled, imprisoned and in disgrace, and its heroine scorned and sickening, like Blake's Rose, she is sick assailed by an invisible worm,  The forces of darkness seem doomed to triumph, the forces of good are in disarray.  But faith, hope and if not charity then a little mercy will go a long way and I enjoyed going along with the ride, even if at times I had to read through splayed fingers so fearful was I for characters I had come to love.

Amazon.co.uk lists Miserere as Christian Fantasy and it is true, there is not so much a spine as a full skeleton of christian faith that supports this story.  But that does not stop it from being a rip-roaring read that can be enjoyed by people of all faiths and none.  The films Solomon Kane and Constantine both grew intoxicating and fantastic tales from the fertile soil of christian belief.  More so than that, Miserere presents a world - or rather a woerld - parallel to earth where every religious belief has forsaken their differences and worked in close allegiance to combat a far greater peril.  While Frohock's characters are overtly christian, it is clear that there are many faiths and many routes that lead to heaven, and as many ways to fall into hell.  (There is in that a lesson perhaps for our own earth and its religious leaders)

The reality of the threat that faces the leaders of Woerld, of demons made real, of possession, of gates into hell itself, of betrayals great and small, makes for a culture that is austere and unforgiving.  There is a medieval tone to the reality of religion in the setting Frohock has created and the absoluteness of both its absolution and its condemnation.

I had dipped into one review of Miserere long before I read it and I remember the reviewer expressing some disappointment with the hero Lucian who they felt had simply made a bad choice sixteen years before the book began, and in so doing had precipitated the story's central crisis.  Having now read the book I think that view does a disservice both to the character and Frohock's story telling.  This is a tale about the repercussions of a choice, an impossible choice between blood and love, between family and friendship, between an unbreakable oath and a broken heart.  Lucian made a choice in good faith (forgive the pun) and has lived with and been changed by the consequences.

Frohock makes clear the reasons for the decision Lucian made and for all the peril it brought upon his woerld I will not criticise him for it.  He is a man of faith and honour, faithfully and honourably portrayed.  He is determined to do right at any personal cost and with no hope of anything more than a fleeting opportunity for redemption.  A tale of such a man is worth following.

There is a intriguing motif in Frohock's writing that the devil does not so much steal or buy our souls entire, as have us barter away our most human emotions in exchange for power, surrendering such gifts as empathy, or compassion in order to work satanic miracles.   It is a thought that lingers with me, and one perhaps to bear in mind as I hear more tales of regions of this our world torn apart in the name of religion.  All we have to do to become monsters, is to abjure those emotions that make us human.