The Low Town series - a dark masterpiece which I review here

There is a bit in the final book where a door handle rattles and the man on the other side seems to be having trouble opening it - I knew what that meant, I saw the significance and smiled to myself. But the author never rubbed my face in it, never went back to show explicitly how clever I'd been in my reading or how clever he'd been in his writing.  It was just something we both knew, it didn't need saying.  And in a way, that is one of the many beauties of the Low Town series, so much understated - unstated even - understanding lying between the lines of lyrical prose.

Low Town is only the second Fantasy Trilogy that I finished reading in 2014 (after Mazarkis Williams' Tower and Knife series right at the start of the year).  The genre is now so packed with good reading that I feel like a dog presented with a multiplicity of over flowing food bowls, running backwards and forwards between each wagging my tail ferociously, desperate to miss nothing.   Faced with such a bountiful smorgasbord, it takes a special quality to hold my fickle loyalty through three books when my variegated list of Goodreads, facebook and reddit recommendations is fit to bust even a kindle's capacious memory.

Daniel Polansky has that special quality and I completed his last two books as at much of a canter as Christmas and work would allow.


In some ways Low Town is an atypical trilogy in that it is not three parts to a single story - as the archetypal Lord of the Rings was -  but three stand alone stories with a common spine of core characters, setting and back story. 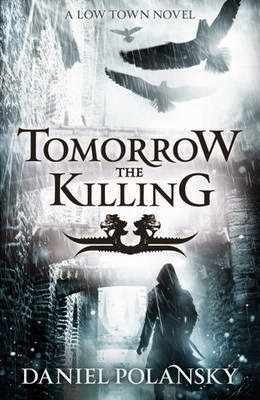 Tomorrow the Killing is set three years after The Sharp Razor Cure, and She Who Waits is set a further three years after that).  The events of each book are just so much history for the book(s) that follow.   Our first person point of view hero continues to be the Warden, the disgraced ex-soldier, ex-secret policeman turned one man drug dealing mafia of Low Town - the seediest quarter of the splendid capital city Rigus in a lustrous empire still aching from post-war wounds.

In Tomorrow the Killing, The Warden is engaged by an old general to help find an errant daughter on a foolish quest for truth and vengeance in his seedy hometown.  In this set-up Polansky and the Warden again remind me of Chandler and Marlowe; there is a vitality to the Warden's cynical voice that is reminscent of Marlowe's drawling best.  But the comparison quickly fails to do justice to Polansky's multi-dimensional masterpiece of character.

Threads from different pasts are woven around the present: the Warden's war - in the bitter trenches fighting the Dren; the Warden's peace as an ambitious policeman navigating a rise into the favour of the unnamed Old Man.  We learn more of what made our hero, what made his friendships, and wonder still at how and why his star fell.  It is not so much his descent from upholder of the law into crimelord that is the enigma.  After all, it is clear that - in the empire capital of Rigus - the difference between the policemen and the criminals is more a matter of clothing than character, of weaponry than motivation.  The puzzle is not what turned him to crime, but what triggered the cancerous self-hate at the core of his being - a hatred he is generous enough to share with a fare few of his fellow low-towners and former colleagues,

But it is that self-hate which makes his actions credible, when he displays a rare and grudging show of interest in another human's fate or future you see not the hardened crimelord but the man lying in the gutter glimpsing still the occasional star through Lowtown's smog of decay.

The three timelines of Tomorrow The Killing march in harmony towards the denoument, where threads cast years apart meet a logical and satisfying fruition.


And through it all,the Warden weaves a skein of vengeful chaos not seen since Mark Antony stood by Caesar's corpse and promised an apocalypse so violent that "mothers will but smile when they behold their infants quartered by the hand of war, all pity choked with custom of fell dead."

I will not spoil the plot beyond saying that it twists and turns as tightly as a Low Town alley, throwing up plenty of surprises but more than that, a ton of vivid imagery and richly sketched characters.

However, I must spare a word for the setting.   Polansky sets out a stall of rich cultures and vibrant flavours, a melange as varied as any medieval mediterranean city - or indeed many a modern one from New York to London.  Walking at the Warden's side I sometimes struggled to keep up with the mosaic of peoples and politics that he slipped effortlessly between and through.  But that is as it should be, we see the world through his eyes in an immersive experience that is all the more pleasurable for feeling real and mysterious, rather than laid out like a text book.

I am also fascinated by the history of Polansky's world.  In my own writing I have mined real world history more systematically than anyone so far seems to have realised, and I am always keen to spot real world inspiration on which a fantasy has been founded.  GRRMartin took his inspiration from the Yorks and the Lancasters to form the Starks and the Lannisters, and turned the humble Hadrian's wall into a mountainous slab of ice, both barriers setting a northern boundary to a belagured  civilisation.  Mark Lawrence took catastrophcally shifted sea levels to generate a fantasy map at once strange and familiar.

Polansky draws still on the Great War, though whether he sees Rigus and the Empire as representing the American or the British contribution to that conflict is unclear - perhaps because it is a mixture of both.  But there are trenches and there are idiot generals and there is youthful enthusiasm shattered in the indiscriminate slaughter of industrial conflict.  Instead of the lethal trump card of machine guns we have the power of magic practitioners, but the impact is much the same.   For those who know nothing of history, the links will not disturb their enjoyment of a well written story one whit, but for others like me, it adds new resonances and links to enrich the reading experience.


She who Waits (Spoiler free review)

The final installment of the trilogy advances us another three years.  Things are unravelling in Rigus, where the Warden attends to business while also guarding and nurturing his little family of old comrade in arms, his wife and Wren their collectively adopted stray. 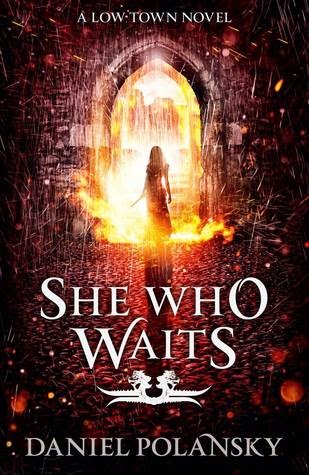 As with the other stories we slip between past and present.  The two time periods are most easily telegraphed by the presence or otherwise of old friends now departed or the absence of deep scars previously inflicted, for it is not Polansky's style - or perhaps not the Warden's - to put anything so prosaic as a date stamp at the start of a chapter.  His town, his story, his rules.  That said, the time switches are smooth and logical as ever, a thought at the end of one chapter sparking a reminiscence at the start of the next.

The plot, the cliques and the cultures are as beautifully interwoven as ever, though the micro-politics of Lowtown power struggles and informers can be a little baffling at times.  However, even when I was trying to remember whether I was supposed to recognise a character or not, I was swept along by the beauty of Polansky's prose.

Without giving too much away, the storyline in She Who Waits moves deeper into the world of the Black House.  This was about more than policing, more than secret policing, more even than international spying, the Black House we learn is the power behind the throne, the de facto ruler of the empire and a colossal target for the Warden's destructive hatred.

The Old Man slips further out of the shadows, another character not given the dignity of a name, and all the more special because of it.  There were parts of the book that reminded me of John Le Carre's tangled webs of espionage woven around the genial George Smiley.  The kind where not so much the left hand suspected the right, as the little finger suspected the ring finger.  The Old Man is as paranoid a leader as Le Carre's paradoxically named "Control",  he is a glowering presence like the fictional soviet spy master Karla.  Just as Le Carre brought his two great adversaries, Karla and Smiley together for a final denoument, so The Warden and The Old Man do have their moment to revisit old times, though the Warden is of a very different mettle to Smiley.

But just as Karla and Smiley had a nexus at a woman, Anne Smiley the unfaithful wife whom Smiley could never let go or forget, so too we must cherchez le femme to understand the life and death of the relationship between the Warden and the Old Man.  Her name is Albertine and she is to the Warden what Irene Adler was to Sherlock Holmes, always and forever the imponderable "that woman" with a power that reaches across the years to still haunt and distract him.

There are again other intriguing parallels with real world history and peoples.  When I read of the Dren groaning under the weight of post war reparations, with some nationalist agitator and demagogue straining for power, I was reminded of Weimar Germany and the early days of Hitler.   When I read of old Queen Bess and her servant the Old Man, I saw another parallel, Queen Elizabeth the First and her spymaster Walsingham.

There is a great deal to read in Polansky's books.  Although I am not much given to re-reading anything in a world that is plagued by a shortage of time chasing a surfeit of good books, Polansky is a writer for whom I may yet make an exception.

As the trilogy concluded I found myself wondering what I had learned of the cussed drug dealing crimelord in whose head I had travelled through three intoxicating books.  There was the bitter cynicism of the first book, then the thinly veiled self-loathing in the second.  In this third volume I find a man who had been swept along and swept aside by the most basic of human ambitions, and yet still - in the midst of a torrent of rapids - he clings to a small rock of humanity.  For all the dark cruelty and machinations that he is capable of, the Warden is above all else a man, painted unapologetically for us by his own hand, warts and all.   He makes no request of the reader for judgment, or mercy, or pity but he earns them nonetheless,