When I was young there was a book in my parents house called "The making of England" It was a slim volume about the history of one of the most exciting periods in the British Isles.  Not to be confused with many similar titled volumes, this history book targeted at young historians began with a description of how in 870 AD no-one walking from Dover to Durham would have known what England was or could be, for the island was just a collection of fractured kingdoms.

I don't know how that book went on because after that intriguing opening it faded into worthy dullness despite several attempts on my part to probe its leaden depths.  It padded the void of sparse dark ages facts with a filling so bland not one scrap of it has troubled my memory.

Bernard Cornwell has taken that same context and period, the reigns of Alfred and his offspring and turned, it into a glorious multi-volumed pageant of action and excitement grafted onto the bare bones of known historical facts.  It may not be history, but it bloody well should have been.  The tale of Uhtred, part witness, part mover and shaker in the greatest period in the formation of England is a story of intricate plotting, compelling characterisation and beautiful writing. 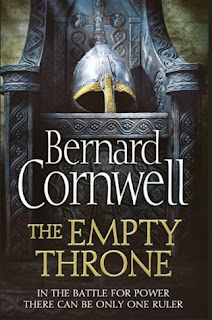 When I reviewed his last book in this series (#7 The Pagan Lord) I worried that the tale was becoming stretched with the resolution of Uhtred's life's ambition always slipping beyond his reach like the end of a rainbow.  But that was to perhaps do a disservice to Cornwell's vision.  Throughout this book there are references to Alfred's ambition for a single country of Engaland and that is the real tale in this series. I suspect that resolution for Uhtred will come with resolution for England and we shall at last see how the gnarled warrior we have lived with became the ancient but crabby narrator we met briefly in the early books.

So, I am content to sit back and enjoy the ride through however many volumes it takes in eh hands of an absolute master storyteller in complete command of his material.

But what of this story what does it bring that is new?

Well Uhtred's children - his son Uhtred and his daughter Stiorra take a more central role - with the son even stepping up for a first person appearance in the prologue.   We see Uhtred still weakened by the wound he sustained at the end of The Pagan Lord, suddenly feeling his years,  And his search for a cure winds alongside the usual context of saxon politics and treachery and marauding danes and norsemen.  It is a story of sustained pace turning many corners where you are almost scared to see what lurks in wait.  But this one is seasoned by an Uhtred not just showing his age, but forced to admit weakness, plagued by a physical frailty that, with characteristic guile he consistently turns to his advantage.

Cornwell works well with the names of genuine history and there perhaps is the reason why it takes a writer of his class to bring this world to life.  For the saxons were so unimaginably confusing with their names Aethelflaed, Aethelred, Aethelhelm, two Aethelwolds, Aethelstan, Aelfwynn, and then for variety Eardwulf and Eadith.  It is surely this more than the blank dark age record which had history teachers of yesteryear scampering for the certainties of 1066 onwards and its easily reconciled Williams and Henries and Richards and John as they sought something that might lodge in a recalcitrant pupils' head.

Still Cornwell slips lightly but faithfully through the phonetic confusion to give us a tale that begins to hint at the series' glorious conclusion.

I have found other history books of the dark ages which have salved the wound of boredom that "the making of England" inflicted and that adds an extra dimension to my reading of his books.  More so than the characters, when the place name Brunanburh appears I know we have our first sight of the scene where in time the series' final segment must play out. Cornwell's placement of Brunanburh is a piece of foreshadowing, like knowing the sex of a baby before it is born.  It echoes through the ages like Camlann does from his trilogy of Arthur.

For those who want to know more, well google the name (and Camlann come to that), for those who like surprises, just wait - I am sure Cornwell will deliver.
Posted by TOMunro at 12:12