Pulling all the right strings a spoiler free review of "The Prince and the Puppet Affair" by G.W. Renshaw

This is the second in G.W. Rewnshaw's Calgary set series about Veronica Chandler, a feisty young private eye whose escapades challenge the expectations of age, gender and indeed genre.

I reviewed the first of them here The Stable Vices Affair The second had languished on my kindle for some months, waiting for the various clouds of work, family and other commitments to lift and - on a not exactly bright easter day I finally found the time to return to Veronica's increasingly bizarre world. 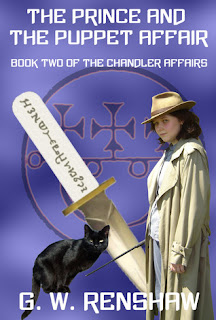 It is a testament to the story and the writing that I consumed it in a single day - and at 287 pages this is far more than a novella.

Renshaw's tale is sustained by his heroine, an engaging and resouceful young woman given a credble voice.  The kind of nineteen year old who likes to pretend "that there's only one seven o'clock per day: the one right after supper." A misapprehension that those of us wh have ever tried to awaken teenage daughters will certainly recognise.

The second book is set a year after the first and, for Veronica, the intervening months have been filled with a succession of reassuringly ordinary cases quite unlike the bizarre events of book one and a being claimining to be demon with an interest in dressage fetish. However, all good things must come to an end. The marital woes of Alyssa Blakeway ("She was not one of those people who can cry prettily") set Veronica off again mixing her own brand of police procedural (we learn how to climb telegraph poles safely - and repeatedly) with all manner of occult happenings.

Renshaw's writing is unobtrusively good. It rattles along with many flashes of wise-cracking (and self-deprecating) humour from the heroine.  "This guy was so dense he made lead look like a souffle" The descriptions are ecnomical and easy on the mind's eye such as this sunrise "A graded wash of orange faded upwards until it met a band of clouds that also turned a deep orange."

There are also little asides in deference to pop-culture that appeal to me but are subtle enough not to irk those who may be too young (or old) to get them.  Miss Blakeway's "gallifreyan" handbag, a car named "binky" and a pythonesque reference to potentially being turned into a newt with the proviso "you'd get better."

For all the demons' demonic power (sufficient to confound a whole alphabet of plans starting with Plan A) I could not help rooting for them, they seemed so much nicer than some of the humans.  As Mercedes M Yardley's own feisty heroine Luna Masterson found in Nameless (my first book of 2016 reviewed here), your status living with demons is best described as "complicated."  And even demons move with the the times -as Veronica reflects "See, Collin, even demons don't give a rat's ass about virginity. Welcome to the 21st century."

This is an entertaining read again illustrated by the author's own particular expertise in martial arts and cooking - even knee deep in criminal demonic invocations we write best when we write about what we know.

Veronica carries the story but with excellent support from friends - if not always lovers. However, bargains have to be struck and fascinations fuelled which means that Veronica's demons (the internal and the external) have certainly not finished with her. Indeed like a close coupled binary star system, they seem fated to spiral into an even closer embrace in the books ahead.

I can hardly wait!