A good read by a well read author, my spoiler free review of "The Red Plains" by G.R.Matthews

G.R.Matthews has created and sustained a unique world in this trilogy that takes what we thought we knew about Imperial China and re-imagines it in a way that feels both different and authentic.

In this concluding installment of the forbidden list trilogy, a struggle that began (In the Stone Road) as a dispute between two city states and their rival dukes has escalated to a conflict that threatens to consume not just the Empire, but the whole of creation. 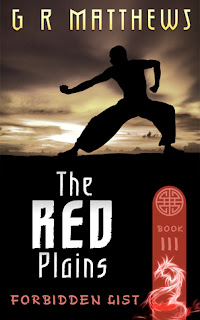 Matthews keeps that epic scale firmly grounded through the same approach seen in the first two books. The reader follows two key participants in a series of alternating Point of View chapters.  There is Zhou, the diplomat, who through the trauma of losing his wife and child discovered the raw power of the spirit realm and his link as a wu to the primal spirit of the Panther.  There is Haung, the soldier trained in two forms of warrior magic and elevated like Zhou to the forbidden list, those servants of the Emperor to whom no-one may offer any let, hinderance or harm as they serve his majesty.

In some ways Zhou and Huang are unlikely protaganists of this tale, there are others with greater powers and higher stakes. At times Matthews' heroes serve as the readers' eyes and ears, witnesses to the power of greater beings. Jeff Salyards in his Blooodsounder Arc trilogy had the scribe Arkimondos tell the tale of intrigue and warfare from a worm's eye view. While Zhou and Haung are far more formidable than Akimondos ever could be, their own development - attending as guests at the table of power (like hobbits at the council of Elrond) - means Matthews can and does use them effectively to guide the reader through his incredibly complex world of multiple realms and ancient conflicts.

In his afterward and elsewhere, Matthews has written of his great hatred for info-dumps - those long chapters of exposition, those prologues of pretend history - in which some authors have unwisely indulged. Epic fantasy must have a backstory of course, and the author must know it - know it all, but like seven eights of an iceberg (or a building's foundations) most of it should be hidden from view, not thrust down the reader's throat.

So Matthew's story builds through the experiences and observations of Zhou and Huang as they follow very different paths.  Battles are fought, friendships forged, heroes discovered and secrets revealed all in an entertaining way and at a lively pace. The use of chinese terms and names lends a sense of immersion in a different world without going to the extremes of unpronouncable invented names with a muliplicity of apostrophes.

Plot seeds laid in the earlier books get to sprout and flower here in surprising ways and at the heart of this tale there is a theme of family.  Not just the family that Zhou lost, or the family that Huang has vowed to protect, but other families who must resolve their differences or else the Jade Emperor and the world as they know it will fail.