A spoilery review of "The Time Machine" by H.G.Wells 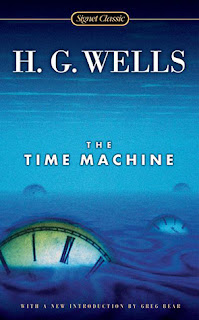 Reflecting back on this his early work from the lofty heights of his later success, H.G.Wells also gives an interesting insight into the process of authorship.  The Time Machine was "the big idea" lurking in his head and waiting for the moment when he could give the theme the time (no pun intended) that it deserved. Yet, financial pressures forced him to rush the story through and preciptously out into the world like Shakepseare's Richard III
"Deform’d, unfinish’d, sent before my time
Into this breathing world scarce half made up"

Who amongst us writers has not feared that the big idea would be squandered in a work that would not do it justice and Well's experience shoudl reassure us at least that there will be other big ideas to follow.  We all have more than the apocryphal "one novel" in us and the big ideas are like the "magic penny" of love that my wife used to make primary school children sing.

"love is like a magic penny, hold it tight and you won't have any, lend it spend it and you'll have so many they will roll all over the floor."

That writing breeds ideas which breeds writing in one of the few natural positive feedback loops.

Anyway, what about the book itself?

Well, written at the end of the ninteenth century it was a time of great social and scientific change

The industrial revolution was in full swing with Blake writing of the "dark satanic mills"
Darwin's theory of evolution was still relatively new.
Einstein and others were pondering the nature of time and space.
Oscar Wilde was writing witty plays poking fun at the rigidities of manners in an intensely class bound system.

H.G.Wells flung those ideas into the authorial melting pot and the melded them into a tale that told as much about his present as our future.  In the first place he had his collection of gentleman identifed by profession rather than name, discuss the concept of time as a dimension through which one travelled.

Then he flung his eponymous hero hundreds of thousands of years into the future to see what evolution had done to human kind and the species had bifurcated.

The industrial workers had evolved into the Morlocks, disappearing underground to maintain machinery whose purpose they had long since lost sight of (indeed Wells himself offers no clue as to its function).

On the surface dwell the eloi, in some way descendants of Wells upper classes (or the farming classes or both). The technology has made work neither necessary nor relevant and they have lost the impetus of leadership and become pleasant but feeble minded pleasure seekers fed but not challenged with their intellect withering in consequence.

And in this twisted world the morlocks rise from the deeps to feed on the eloi in what cannot quite be cannibalism since they are clearly no longer the same species.

It is funny how we all of us live in the moment, how we assume a permanence to the culture and technology of the time in which we live.  Our imagination of the future projects those themes forward and my own germ of a science fiction idea is built around our mdoern challenges of global warming, population growth and sea level rises.  Maybe someday I will get the time to give that big idea its proper treatment.

At the same time we assume our own present - in its culture, attitudes, system of government - has some perfection and permanence. Those who might criticise one religion for its demeaning attitudes towards women forget that a couple of centuries earlier their own religion espoused discriminatory views as its own orthdoxy. Those who berate the intolerance of  sexual difference in countries forget how recently their own countries repealed laws that made homsexuality illegal. Which is of course, not to say we were right then and wrong now, but just to be aware that we are all (as nations and individuals) travelling through time and being changed by the journey and should be mindful of that before we try to claim we stand on some unique peak of moral high ground.

Wells projected the issues of his own time forward and what had been a class divide became not just a racial divide but a species divide as technological advances spared all from the need to work.   That was - in essence - the big idea and one is mildly curious to see how Wells might have developed it if he had given the bigger fuller treatment he originally intended.