It was something a surprise to discover that two years elapsed between the publishing of Scourge of the Betrayer in 2012 and this, its sequel in 2014.  The surprise is because the action between the two books is entirely continuous.   Our first person hero Arkomondos - scribe and occasional crossbowman - steps straight from the last page of Scourge onto the first page of Betrayer with barely a pause for breath still less a change of clothes.

At this point I should warn readers that, while I will let slip no spoilers for book two, the plot builds so seamlessly on the conclusion of book one that spoilers for book one are unavoidable.  So if you have hopes of an unsullied experience of Scourge of the Betrayers you should move on now, perhaps after briefly admiring the cover of Veil of the Deserters. 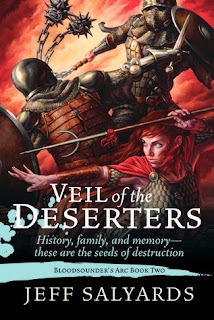 The charm of both Scourge and Veil is that we ride in the unreliable and ill-informed head of Arkamondos.  The twisted strands of plot unknot themselves in stops and starts between and within the bloody battles and hard fought skirmishes. I was glad that I only skim read the blurb for it gives a little more away than Arki could have known and there is a pleasure in seeing the conspiracies revealed piecemeal and in "real time" like an Arabian dancer losing one veil then another.

Veil takes the story of Braylar Killcoin and his disperate desparate band forward. It also addresses some of the concerns that spoilt the enjoyment of others (if not me). After reading and loving book one, out of curiosity I took a look at some of the less favourable reviews of Scourge.  I recognised the book they described as the one I had read, but I thought they were viewing it from a different and less flattering angle.

One reviewer was dissatisfied with the revelation of the great secret that was carried in the wagon throughout book one.  It seemed to them a hollow prize and a weak plot point unworthy of the sacrifices that were made for it.  But the thing to remember is that the reader only knows what Arki was told and Arki is the unreliable and far from trusted supernumerary in a close knit band of cut-throats.  Who would have told him the truth, the whole truth and nothing but the truth? There is a far greater and credible part to be played by the secret in the chest - one that will test Arki's particular talents.

Another reviewer was unhappy with the amount of time devoted to the long trudge across the grasslands with only Arki and Braylar and dead men's memories to keep each other company.  Certainly, it took me a fair while to unsort the diverse band of Braylar's company, separating the officers and the NCOs and I was slightly hampered by the long period in the first book where all of them bar Braylar disappeared from view.  However,  having straightened it out in my head the second book picks up with the band altogether and rattles pleasingly along.  The mental image of each coarse mouthed Syldoon and their particular curses and foibles are firmly anchored in my imagination.

There are many themes in Salyards' book.  One of them perhaps is that it is memories (not manners) that maketh a man.  We learnt in book one how Bloodsounder curses its wielder with the memories of each victim it slays.  A curse which cripples Braylar unless a memory witch of some description can  rummage in his head and draw out the poison of a dead man's memories.  I saw a similar motif in the "Last Werewolf" by Glen Duncan where Jake Marlowe the eponymous anti-hero consumes the memories as well as the bodies of his victims.  However, the side effects do not afflict him with the same disorientation that Braylar succumbs to. 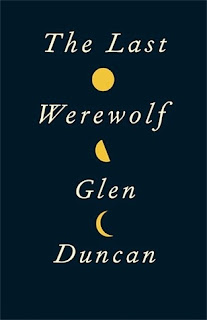 The curse of Bloodsounder and the memory witches are amongst the most distinctive features of Salyards' carefully built world.  There are some sharp truths in there. We are all of us really little more than the sum of our memories and the ways they have shaped our personalities.  I imagine the tragedy of diseases like Alzheimer's is that they rob us invisibly of those we love, leaving only living monuments to the people they once were.  It is understandable then the horror and revulsion with which those gifted with memory magic are held by an unenlightened populace.  A horror which makes finding an un-lynched memory witch something of a difficult feat.

Unless that is one is in the Syldoon Empire where Memoridons serve an imperial purpose, including Braylar's sister Soffjian, a pair who move beyond mere sibling rivalry and into a deep mutual loathing.  It is a loathing founded in their childhood and perpetuated by the different paths they have taken since, blunt warrior and untrustworthy memory witch.

Salyards' magic system is built around memory magic and indeed the control of all perception through which our senses filter and record the world around us.  It is a clever premise which drives the story at every level.

There is again Salyard's epic descriptions of minor battles.  Thinking back I could count five distinct battles rendered in amour crashing side splitting detail.  As someone who can barely tell a vambrace from a gambeson and has only a passing understanding of an aventail, the blur of technical detail was a pleasantly immersive experience.  It was like sitting in a French village soaking up the atmosphere while catching with certainty only one word in two.  Salyards does not explain or lecture, he shows.  What comes through the robust knowledge is the flavour of real battle, the feeling that you are riding alongside the Syldoon as they confront another desperate challenge.

They are a ruthless band, though another theme that the book toys with is the consequences of morals.  In Joe Abercrombie's book Half the World Father Yarvi tells Brand "A man who gives all his thought to doing good but no thought to the consequences... that is a dangerous man. "  Arki too learns that the moral high ground is a dangerous place where the quality of mercy is not so much strained as doomed to back fire.

The key feature of the story is the recall of Braylar's band to a gathering of the Syldoon in the city at the heart of their empire.  Braylar's unfinished business with a certain priest keeps him from the journey home until well over half way through the book.  Nonetheless, there is time and space for a richly painted culture of an oppressive regime built for war and ill equipped to survive a weak piping time of peace unless grim work can be found for idle hands.

The dialogue remains a strength for me in the book. Personality and plot are revealed through the entertaining interactions between characters.  Salyards imbues them with individuality, personality and growth which is just as well, for the story is growing larger in scope and scale as the plot unfolds.  The characters must rise as well to meet it and, in the final instalment, I would not be surprised if the Gods themselves took to the stage which Salyards has so expertly set.
Posted by TOMunro at 13:53