Sixteen masters and mistresses of horror writing regale us with a selection of "beautiful horror stories." That may at first seem like an oxymoron. Horror is traditionally scary, bloodcurdling, tense, shocking, in some way or other beyond the norm.  I have read various pan horror collections in my youth, none that made much of a lasting impression on me, besides the frisson of fear reading dark tales under the bedclothes. Beautiful is not the adjective of first resort when describing Horror. 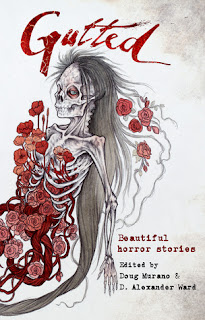 But, in the selection of stories and in the writing of them, this volume shows a haunting quality, a mesmerising style.  The beauty lies not so much in the eye of the beholder as in the ear of the reader as elegant sentences and paragraphs wrap themselves around horrific cores.  A juxtaposition reflected in the stylish cover of flowers sprouting from a skeleton.

Time prevents me from reviewing all the stories and, to be fair, some worked for me better than others. But below I have written more about my five top picks.  Other readers may find different favourites, such is the nature of anthologies - and indeed of readers!

Those used to Miss Murder's writing will be familiar with the challenge she offers to conventions of victim and villain.  This story is again about two people, in some ways it reminds me of her piece Apocalyptic Montessa and Nuclear Lulu.  Again two damaged people meet, drawn into each other's gravity like a binary star system, swirling closer the one feeding off the other, the other more or less willingly giving. Nikilie is a woman much abused by those around her and - in turn - she abuses herself, fresh wounds in her flesh to match each cut the world makes in her psyche.  But then she meets Michael and everything changes.  He sees an inner beauty she did not know she had.  "That night she took a razorblade to her inner thigh, but the cuts were heartless and shallow."


Picking Splinters from a Sex Slave by Brian Kirk


It is every parent's nightmare to lose a child to abduction, but what if the child is returned years later and the restoration of what was lost is a still greater nightmare.  Kirk paints a vivid picture of a father reunited with a daughter abducted and abused long ago. It has echoes of all the real life abduction stories we have seen in the news, in some ways it reminds me of the Fritzl story in Austria. How can those freed return to a normal life, more importantly how can they find happiness after an experience that has changed and damaged them. The father in Brian Kirk's story will make many sacrifices to restore his daughter's happiness but the reader may ask - could they do as much?


Is it an accident that parenthood and horror are so akin? That having a child opens up a whole new vista of ways in which to fear the dangers of the world?  Or is it that, being a parent myself, this story and others like it strike a resonant note more so than others.  I also work in education, where everyday we have to confront another exploitation of new technology in old evils. Cyber bullying, the risks children are exposed to in the privacy of their own bedrooms, a world away from my own childhood. I've also relatively recently moved house and job dragging children in the vulnerable teenage years from their embryonic circle of friends.  For my children it has worked out well, but those experiences and anxieties made this story sing for me.  A two handed tale of child and mother, the one displaced, sullen, angry brooding with a horror she dare not share. The other, anxious - like all parents of teenage children finding that every word is the wrong word and so they stay on opposite sides of the same door trapped in a failure of communication. Beautifully written, horrifically real.

Coming to Grief by Clive Barker


As a child when I walked home from school (a school I shared with Nigel Farage - but that's an entirely different horror story) there was a lane I had to walk up Low Cross Wood Lane, it had a kink in it - a sort of chicane - which made the top half invisible from the bottom.  As a small school boy I always had a fear of what might lie unseen around that corner.  Would it be kids from the other local school waiting to beat me up - in truth I was only hit once there - but I try to remember the vulnerability of that fear when imagining what it is like to be a woman in today's world, a vulnerability that grown men cannot so easily empathise with.

There is much more in cleverness in the writing of Barker's tale than the ingeniously punning title. Miriam has returned home to tidy up the affairs of her estranged and recently deceased mother.  The antagonist in this story is the Bogey-Walk a curving lane along the edge of an old quarry that haunted her youth and still has the power to terrorise the older successful woman that the child has begun.  Besides the obvious resonance with that not-forgotten Dulwich lane - this story appealed because of the exquisite writing as Miriam picks through the bones of her relationship with her mother, rekindles an old friendship, and all the while orbits the old fears of the Bogey-walk in ever decreasing circles.


Skilful evocative writing abounds throughout the anthology along with some innovative takes on the horror genre. Most innovative perhaps is Paul Tremblay's Haunted House story which took me back to a childhood of Steve Jackson scripted adventure books (anybody remember the Wizard of Firetop Mountain?) where after each page the reader had a choice to make and - depending on that choice - would turn to a different page to advance the story in a different direction. The miracle of embedded links in ebooks makes that all so much easier and the reader gets to choose how far and which route they take through a Tremblay's tale of a woman revisiting a house that scarred her childhood and still plagues her dreams