This is the fourth of G.R.Matthews novels that I have read and, at first glance, it's style and context is as different as you could imagine from the other three. 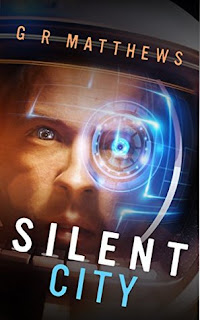 The Forbidden List trilogy (The Stone Road, The Blue Mountain, and The Red Plains) provided a fantastic re-imagining of ancient China - a refreshing alternative to the medieval European style milieu which is the staple of so much modern fantasy. It was a tale told from two alternating third person characters facing crises of epic proportions but the tone still had much of the formality that I would expect in high fantasy.

Corin Hayes' adventure in Silent City is an altogether more visceral first person adventure set in a far future where humanity has fled beneath the waves to live in undersea cities.  The story is packed with action from the first page which has our hero preparing for a beating to the last where our hero is... (spoilers as Riversong would say).

What difference does a Point of View Make?

I have been curious for a while about what difference a point of view makes.  For example, would Mark Lawrence's antihero Jorg have stirred up so much emotion amongst readers (either intoxicated or alienated by his evil) if his tale had been narrated in the third person?  Would that detachment - that additional distance - have ruined the story? Lawrence writes powerfully enough in the third person tales of the Road Brothers, so maybe not but it would certainly have been different.

With G.R.Matthews, I have another chance to consider the impact of an author's chosen point of view.  Silent City is told in Hayes' voice and it is an entertaining one. A sort of deep ocean Philip Marlowe, weary cynical, existing rather than living in a confined community that knows too much of his past.

Writing in third person point of view the author is a director manipulating and inspiring his cast without ever being one of them. With first person point of view the writer becomes an actor wholly inhabiting the character. As Iwan Rheon knows from playing Ramsay Bolton, acting an anti-hero can draw down a certain public opprobrium. Corin Hayes is not so much an anti-hero - more a likeable underdog (though there were times he was a little free with his wrench for my liking). But the story depends on us rooting for him and - with the intimacy of first person - we do just that.

He is a man with more than his fair share of personal tragedy. In this relatively short book we get a few glimpses of Corin's backstory which I sense will run like a thread through the next book and beyond as inevitably the past casts shadows well into the future.

Same author but a different setting?


There is an inventiveness to Matthews world building in Silent City. While the vision of the future appears as distant from ancient China and the forbidden list as it is possible to be, there are still parallels to be drawn between the tales that hint at their shared authorial paternity.


The story cracks on at a decent pace - I read the last half in a single sitting.  For all that the surface world has been abandoned and the human population decimated, those that remain still find plenty to argue about and fight over. In the midst of it all Corin Hayes nurses a drink in a seedy bar not knowing what opportunity is about to knock for one of his dubious past and unusual skills, still less aware of how quickly such opportunities can go belly up.

And for those wondering what pun I was trying to make in my title - here's a great piece of music  enjoy!
Posted by TOMunro at 13:55