Perhaps it is a product of the busy age we live in that short story anthologies have become more appealing to my taste than before.  Bite sized fiction for a world driven by sound-bites, and there are plenty of bites of different kinds in this riveting collection which Shawn Speakman has edited. 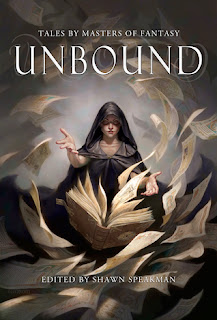 Some of the authors I already knew and had read, others are names glimpsed on social media.  Some of the stories have roots in the authors' main works though still read well as stand alone stories, others are tales told in isolation, their backstory fashioned at the convergence of each reader's and author's imaginations. The anthology is inevitably an eclectic mix, but still entertaining in its own right and a powerful taster of different authors' styles and approaches.

In some ways it is like those trios of deserts offered in the best restaurants these days, a mix of different but complementary taste sensations that leave you hungering for more.  Just as a festive season taster can lead to bigger things and a damaging expansion in the waisline, so too this anothology might cause an explosion in my already daunting TBR pile.

But - to the stories themselves - and there are so many and with such variety that it will take two blog posts to do them justice..

Beautifully written, the transition from the normal world of a teenager into some dark secret, an accident of birth landing her in the midst of an ancient covenant handed down from generation to generation on which the fate of the world rests, the world and one captive.  Surreal, hypnotic, like its central theme, the reader like the protagonist is drawn into a world that lingers in the mind, or is it the mind that lingers in the world?

Stories are Gods - by Peter Orullian.

A story that believes in the power of argument, or perhaps an argument that believes in the power of stories.  A hero who is physically weak, but mentally strong fuelled by a powerful love and a tragic schism to take to a debating floor in a world where academic philosopy has suddenly become dangerous.  Themes from a wider well-built world (The Vault of Heaven I infer) bleed into this story though, like its protagonist, the story stands well enough on its own two feet.

River and Echo - by John Marco.

If you have seen Will Smith's "I am Legend" or the film "Silent Running" you may see the same similes that I did.  A lone survivor and his unusual companion, living ghosts in the detritus of a plague ridden city. There is a traditional fantasy feel to it - rather than sci-fi, a city with walls, lit and heated by fires, defended with arrows. Though with a slight steampunk feel.  The story is sustained by the wonderfully well-drawn poignant relationship between River and Echo.

A dichotomy of Paradigms - by Mary Robinette Kowal

With this story the anthology lurches into a far future of interstellar piracy and technological innovation that enables artists to pursue their craft with the same vibrant immediacy of a war photographer.  Patrick the brush wielding protagonist reminded me of a pen scribbling character W.W.Beauchamp in the Clint Eastwood film "Unforgiven"  - the journalist hack turned biographer chasing after a gunslinger to document his life.  Only Patrick finds that painting the pirate queen poses more of a challenge to his conscience and his craft than he expected.

John Crimson is a policeman perched on the cusp of the age of science and reason - a time when method replaced madness, when passionate crime would yield to patient investigative technique. And into his world steps the disturbing Malena Penar, intoxicating and bewitching.  In a journey that spans half the world she challenges his faith in the rational, his dismissal of superstition but in the end I found it hard to tell who won!

An Unfortunate Influx of Filipians by Terry Brooks

The story is a bridge into the magical world of Landover where lawyer turned King Ben Holiday finds himself presiding like a cross between Judge Judy and Solomon over a gnomish dispute.  Problems beget problems in a progeny of biblical proportions and in the end it is management, rather than leadership which must resolve the crises that competing incompetencies have created.

The Way into Oblivion by Harry Connolly.

When the centre of an empire has suddenly fallen to an unknown power, that is not so much an opportunity as a threat to those previously subjugated peoples who might be tempted to flex the muscles of their newfound independence. Song, sister to the leader of the Holvos people, finds more dangers lurk beside a crocodile infested river than within it. When all choices are difficult and all options are unpalatable, she must decide what motherhood means to her.

The writing is delicious, a tasty heady morsel as the daimon Monsieur Charmant frequents the darkest corners of an alternate Paris and London in an obsession to utterly possess a poor desperate soul who had already sold him the best part of herself.  The story draws on a well built world of Dawson's other works but gives what I assume to be a smalller character his moment to preen his awful nature in technicolour limelight.    I liked this line especially Money had been important to him once. Now it was power and possession, the tang of owing that hit the air everytime a client gave more than they really had.

A Good Name by Mark Lawrence.

This is another work where a supporting player from Prince of Thorns (and the short story Select Mode) has an opportunity to be fleshed out in more detail. Jorg had his band of brothers and "the Nuban" - never given an identifier beyond that - was one of my favourites. In this short story we find what brought him from the village of his birth to a place at Jorg's side in Ancrath.   It begins with pride, the pride in a name won through hardship, a name that should not bow when it was not merited.  But sometimes it is not enough to be right, and the consequences of pride cast long shadows.

All in a Night's Work by David Anthony.

In an action packed adventure Ash - a prince's faithful bodyguard finds a night off is anything but quiet.  Deadly demons stalk the palace of an alternative Egypt and our young hero sets off in a pursuit of the assassin as single minded as it is foolish.   The only assistance to be had comes from a beetle with a broken antenna and as Ash realises partway through the chase "..you can't think of everything when you're dangling a hundred feet in the air, holding on to the scrawny legs of a faulty beetle."  The action is as relentless as the opening sequence of a James Bond movie, and the hero scarcely less resourceful than 007 himself.

A grim tale with a grim hero illuminated by some startling pose from the very first line onwards-  The clouds gnawed at the moon, devouring it in slow steady bites. Gryl is an unusual killer - a Prodigy - who escaped enslavement and sells his formidable powers, though still constrained by some sense of a just cause, of a distinction between the guilty and the innocent.  When such a man goes in pursuit of a slaver who has been trading in and abusing children the outcome is unlikely to be pretty. However, it is the jobs that seem easiest at first, that are likely to end most messily and by the end of this gripping piece Gryl has certainly painted the desert red.

This was outrageously entertaining.  My eldest daughter has resolutely resisted the lure of the fantasy genre but also enjoys cheerleading as a base with the Cambridge Cougars, so a story that throws a carload of squabbling cheerleaders into a dark fantasy/horrow blend should be the kind that would fire her interest. It's a bit like the way "Dawn of the Dead" combined zombie apocalypse with fantasy shopping to become one of my wife's favourite films.  Speaking of which, this riveting short story also features a reformed zombie amongst its kick-ass, kick-head, kick everything leading females.  "...thus proving the old adage that you should never forget to wear a cup to a cheerleader fight.  No matter what kind of junk you're packing in your pants, a good boot to the groin is going to put you down if you don't have protection."

So there I am, 51% of the way through.  I'm off to enjoy the rest of the anthology and I would suggest that you do the same.
Posted by TOMunro at 14:44