Fraternal Fragments - my review of Road Brothers by Mark Lawrence

My goodreads target of 42 books to be read (and reviewed) in 2015 continues to mock me, supremely confident in its inevitable victory as - even now - I just crawl over the halfway line. However, I am determined to go down fighting and Mark Lawrence's latest publication - an anthology of short stories about Jorg and his brothers - is an easily digested morsel which nonetheless packs quite a punch. 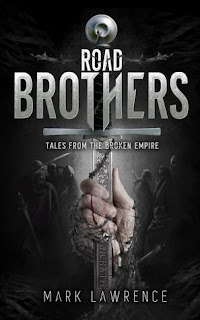 Jorg bestrode the Broken Empire trilogy dominating his stage as completely and charmingly as Shakespeare's Richard III.  With a central character of captivating brilliance, I found that the brothers sometimes struggled to illuminate and define themselves. It is like the search for planets orbiting distant stars (exo-planet) where the planet's characteristics must either inferred from the effect they have on the central star, or can be observed directly only when the central star is obscurred.

This collection of short stories offers plenty of opportunity for individual brothers to showcase the subtle nuances of their own pasts, free from Jorg's dazzling light.  We see Makin (twice), Red Kent, Brother Sim, the Nuban and of course Rike operating alone, driven (mostly) by their own motivations.  It is interesting to see, in Makin and Kent's stories particularly, how slim is the line between the bandits and those that they prey on.  Jorg's rampaging band of brothers, after all, was not a single abherration in the midst of a perfect civilisation (it's not called the broken Empire for nothing).  They were one band amongst many in an era reminiscent of the 12th century turbulence of King Stephen and the Empress Matilda - a time when it was said that God and his Saints slept.

There are also two stories specifically about Jorg - "Select Mode" and "Sleeping Beauty" - which I have a particular fondness for having read both when they were previously published.  As a result of one of Mark's many competitions, I got to do a sound recording of  Select Mode while the author Richard Ford did  a recording of Sleeping Beauty. I liked the economy of Select Mode - an insight into a young man still near the start of his road career.  Sleeping Beauty, a longer piece, has all of Mark's inventiveness, more of Jorg's cussed refusal to lose, and an entertaining take on some familiar fairy tales.

You can listen to both audio recordings here.

Right up until the end of this collection of short stories, I was unsure which would be my favourite.  I had always liked Sir Makin and the Nuban so their tales - filling in back stories in a way which made sense of their behaviours in the main trilogy - had a head start insecuring my affections.

But then I read the last story that of Father Gomst, and here perhaps I return to my initial observation for - intriguing as Father Gomst is - this is a story of the Ancraths - dazzlingly dark as they outshine all others.  Gomst appears in their lives with all the hope but none of the power of a Mary Poppins figure put in charge of a murderously rebellious nursery of two young brothers. In this story we see Olidan - instinctively cruel. We see Jorg aged six and you may, like me, be reminded of the Jesuit saying, "Give me the child until he is seven and I will show you the man."  We also see William aged four and see how even the very young can manipulate and control adults, snaring them in a mesh of their own threats and promises.  It is this story too, where lines of Lawrence's prose most readily leapt out of the page at me.

"Clergy, no matter their station, do not bow to crowns, but Gomst felt the pressure on his shoulders even so."

"Gomst had told bigger lies for worse reasons.  One could hardly rise in Roma's church these days without a crooked tongue."

"Lies are soft and accomodating.  The truth is hard, full of uncomforatble angles. It rarely helps anyone."

In this venture Mark Lawrence joins the ranks of the self-published authors - or at least hybrid authors - ably assisted by Pen Astridge's wonderfully professional cover.

Within all the stories and their footnotes, there are massive spoilers for the Broken Empire trilogy, fateful forecasts and promises - enough to make those of us who have read to the end of Emperor of Thorns, smile at a circle completed, while others new to Jorg would find the trilogy denuded of some of its biggest twists.

But then, although these stories mostly precede the trilogy's bifurcated chronologies,  they were not intended as an introduction to Jorg's tale, so much as an opportunity for those of us who loved it to revist some old acquaintances an ambition it fulfils splendidly.


I might also mention at this point that I too have found some inspiration in Jorg's tale, having twice used him as the subject of entries in fan-fiction themed short story competitions at Fantasy Faction, so for those still hungering for Jorg related short stories, my own offerings are here.