It would be true but also very misleading to say that part of me went to sleep while I was finishing the book two of the Red Queen's War.  The part was my leg which, compressed against a plastic garden chair in an Italian campsite, went quite numb as I sat perfectly still racing through the last 10% or so of Mark Lawrence's latest masterpiece.  Jalan Kendeth's continuing oddessy is an odd kind of quest, a most unconventional road movie, mainly because it is not a movie, involves a lot of sea, no cars and very few roads. 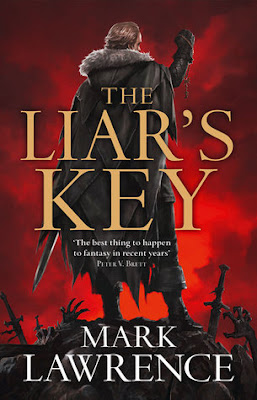 However, like "Rainman" or "Thelma and Louise" it features two contrasting characters with very different hopes and fears travelling towards an uncertain destiny on a journey where they acquire a variety of more or less permanent hangers on and adversaries.

It is Mark Lawrence's longest book to date. It is also a book where I, like many of his fans, can feel a real sense of personal contribution.  This is a book title that we got to vote on!  - and yes "The Liar's Key" was the one I put my mark against.

The Liar's Key continues the elements we have seen in all of Mark's work to date.  There is an inventiveness that underpins everything, the writing, the characters, the plots, sub-plots and side-plots.  The rich soil of the fantasy genre is a perfect ground on which to sow seeds of such imagination. Jalan carries us smoothly from tragedy to comedy and back again, describing the worlds and the peoples with such a vibrant voice that the reader has to forgive him his cowardice, his greed, his faithlessness, his immorality, his cruelty to his rivals and his utter self-centredness, .

Well it is perhaps a little unfair to suggest that Jal is completely without redeeming features (Is blond a redeeming feature?) However, blood is thicker than water and travelling alongside Jal we discover, much as and when he discovers it, that there is a buried past to him and to his family.  There is a particular charm in watching him revisit the innocence of his own youth and the guilt of his grandmother's.  The weaving of the past and the present timelines is deftly done and exposes the nature of The Red Queen's War, you might call it the ultimate war.

Mark's writing remains as brilliant as ever. A few deft brushstrokes of words that paint a picture more completely than many a writer might manage in several pages. And then there are the descriptions that stretch out the mundane with a poetic lyricism.  What might in one book be, "The land gradually disappeared over the horizon" in Mark's hands becomes,

"I hung at the Errensa's stern, watching Norseheim diminish behind us, compressed between sea and sky into a dark and serrated line.  Then just a line. Then imagination. And finally memory."

Jal has his moments of pure comedy, a sex scene rendered in evocative but not explicit prose which quickly highlights some of the perils of love in a cold climate.  Then there are the many enemies who Jal so carelessly offends and whose clutches he struggles to elude leading to an abortive duel scene which reminded me of Sir Andrew Aguecheek's ineffective sword twirling in Twelfth Night.

The plot swirls and reforms around the central artefact, the liar's key, which can open any door (provided you can find the door) and which carries a curse such that even those who yearn for it, fear to steal it.   Occasionally some old friends and enemies from the Broken Empire trilogy fall into Jal's orbit, like comets sending out a brilliant tail and then flying off to be hidden in the greater darkness of Jorg's story.

There are references to the world of the builders, a world we might recognise as our own, with plasteek and fones on which bishops attempt to talk to God, though I reckon the signal strength might be less than I enjoyed on an Italian campsite. The object intended to test their faith also promised a rather extreme form of excommunication should they succumb to its temptation. I also liked the motif that even a gifted seer can either foresee the future or change it, but cannot do both.  The idea appealed to the physicist in me stirring resonances with Heisenberg's uncertainty principle, or even the simple fact that so often taking a measurement changes the measurement. And having read Mark's Jorg short story "Select Mode" I was delighted to see a builder's world effect from that make its presence felt in this book.

The bond that tied Snorri and Jal together is a little looser in this book than its predecessor and so we see less of Snorri than we might. Prince of Fools in some ways resembled a story of two convicts on the run, handcuffed together by a force they could not break. In the Liar's Key they are more able to separate and spend time apart and, as Jal at times loses sight of Snorri, so do we. But Jal is an entertaining companion in his own right, finding scrapes he must extract himself from without the benefit of Snorri's muscular forearms.

With Jal so often in the driving seat of his own life you can be sure that things will run far from smoothly and certainly not like clockwork!