Two people and one imperative made me read this book. The first was my daughter who had studied it for A'level and having watched the film wanted to discuss it.  The second was a colleague who quoted the book's final line at me when a decision of mine sent her department back to a high dudgeon within the building that they had a few years earlier and with some relief escaped. "And so we beat on, boats against the current, borne back ceaselessly into the past." The imperative was my fast receding ambition of reading 42 books in this year and the Great Gatsby had the huge advantage of being a short (171 page)book more a novella really. 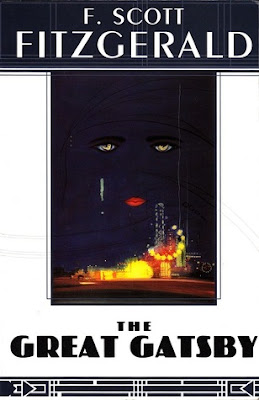 It turns out that my daughter had seen the film to completion but read bits and pieces of the novel, such is the cherry picking nature of A'level English literature these days, and even the Great Gatsby, consumed in a few days by the side of Lake Garda, could not put me back on reading track.

However it is a great book, one that deserves its tag of classic.  I have long felt that a measure of artistic genius is economy.  The great artist paints in a single brushstroke an image that draws you in.  The great writer in a few well-chosen words conjures a vivid scene within the hollow O of our heads. Another measure of artistic talent is whether something makes you think, whether the story stays with you turning over and over in your mind after you have put the book down, whether the picture captures your attention in a new and different way every time you look at it.

The Great Gatsby, passes both those tests.  Each scene is brief but necessary, events off stage are alluded to by the passage of time in which we can assume Gatsby's rekindled love affair with Daisy is proceeding as these things do while the narrator Nick Carraway tries to ingratiate himself with Jordan's senile aunt.  There is a sparseness to the dialogue, snatches of speech, isolated quotes which give the whole the genuine feel of a young man reminiscing, picking out key memories.

There is comedy too, deftly described. The scene where Gatsby contrives to coincidentally call on Carraway at a time when by scrupulous prior arrangement, Carraway has invited his cousin Daisy for dinner is a delight.  The transparency of Gatsby's angst, the gardener sent over in the pouring rain to cut Nick's lawn so it will be just right.  (Whoever cuts wet grass, let alone grass on which is actually raining?)  Gatsby with his hands his pockets, a desperate bit to quell his agitated fidgeting that reminded me of my own pose, hands clasped behind my back (in fact behind the chair) during one of many unsuccessful interviews.  (I must have looked like I was being interviewed by the Gestapo).  And the naivite of Gatsby who can tell it is not going well but needs Nick to tell him that Daisy is as embarrassed as he.

It is beautifully written and, in its way reminded me of another classic whose title seems particularly resonant.  Great Expectations, which I was forced to read for English O'Level long ago and from which my enduring impression was of Miss Havisham, the jilted bride still in her dotage wearing her wedding dress within the dusty remains of her forsaken wedding breakfast. What struck me there was the grand waste of such a life lived on a fragment of memory, trapped in the past like a fly in amber.  But there was a magnificence in that waste, and Gatsby carries a similar single minded obsession, an inability to move on from the past.

Gatsby's greatness lies not in his wealth, his entertaining, his shady dealings, or even his self-invention.  Gatsby's greatness is in the focus with which he brings all his considerable resources to bear in a bid to recapture a butterfly moment of happiness in his past.  A belief that you can not just revisit but also recreate the past.

There are modern resonances too.  Since first "friends reunited" and then "Facebook" came along social media has been a means by which to find not just new friends but old loves.  How far would Gatsby have pursued the easy option of a sending Daisy a facebook friend request if that had been available to him?

My eldest daughter who, unlike the A'level English literature student, had read the whole book did not like it.  The reason she gave was that there were too many unlikeable characters and indeed there are deep flaws in almost everyone we meet.  Fitzgerald paints a picture of decadence, arrogance and self-interest.  Gatsby is flawed, fatally flawed.  But the other central characters, Tom and Daisy are far from virtuous.

While Tom's bristling arrogance in the way he treats others is clear through his infidelity and the simple fact that he breaks Myrtle's nose, Daisy's flaws are less obvious.  At first we might think her the victim in a loveless marriage, but it is one she walked into of her own accord lured by money such as Gatsby never seemed likely to possess.  The money insulates her from real life in a way whch enables her to play at everything, at marriage at parenthood at friendship, at love, yet always thinking that they can be dropped at an instant.  In this she shares more with her husband than with Gatsby and that, in the end is why she cannot leave him. It is Carraway who must play the part of Nanny and take her lover away, just as her briefly glimpsed well behaved daughter is taken away to the more parental support of her Nanny.

And Gatsby, for all the perfection he imagines in her, still tries to lure her to him with an ostentatious display of wealth and entertainment. He knows money counts for her and that is all right by him it is part of her charm rather than a shallow weakness. She is not just the perfect complement to the lifestyle he has carved out for himself, she is the keystone that completes it.  Or rather, the person he imagines her to be is that keystone.  A cynic once said that "The person one loves never really exists but is simply a fantasy of the heart focussed through the lens of the imagination onto the screen which it fits with least distortion."  So too Gatsby strains for a perfection that is certainly not in the present, and may not even have been in the past.

And that is the central theme that Fitzgerald alludes to in the final line of the book, that desperate magnificent struggle to recapture a love that never really existed to burrow into the past as those facebook ex's pursue each other, viewing it all with spectacles so rose-tinted they are almost puce.

One wonders too at the timing of the book, written in the 20s when the Great War still cast a long shadow.   A war too that Gatsby himself lived through and, in reputation at least, prospered by. How far did Gatsby's infatuation with the memory of Daisy reflect the world's yearning for the innocence of the pre-war days, when everything was at is was assumed it should be and always would be.  However, in pursuing the old love affair Gatsby's struggle reminds me of the title of a child's book about a Dinosaur a Dragon who discussed their different origins and summarised themselves as "No Now and Never Was." That seems to describe the love Gatsby imagined Daisy had for him, but it is his single minded pursuit of that vision which earns him his epithet of Great, an adjective which the book also richly deserves.