There are books born of a single premise, a key idea.  Some find their ambition has overreached the grasp of their central theme, that the concept is incapable of sustaining the story and is either stretched too thin or bloated with a weight of distraction and fluff masquerading as subplots.

Others find a perfect blend of imagination and style to take one sentence and turn it into a story you literally cannot put down;  "Pretty Little Dead Girls: A Novel of Murder and Whimsy" is such a book. 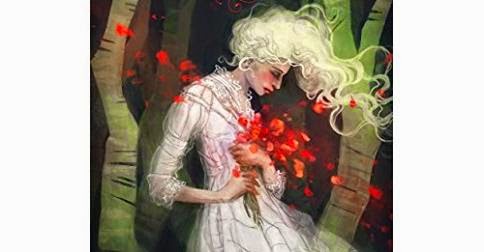 Its simple theme is that the central character Bryony Adams is doomed to die, but not in the sense that we are all making a journey from birth to death.  Bryony will die young and she will be murdered.  She knows it and everyone around her knows it, from her kindergarten teacher to the guitarist who looks into her eyes and runs away from the fate that awaits her.  The book is then about how do you live life, a life of short but indeterminate length in the shadow of such a fate, and how do those about you who care for you manage the burden of their own knowledge.

But more importantly than that, how do you write a story that has such a grim, albeit surealist spine to its tale.

I have read many books that have death as a theme or even a character.  "The BookThief" by Marcus Zuzak and "Before I Die" by Jenny Downham and those works of John Green’s that I’ve read also have a certain commonality of more or less doomed central characters.  But there is a difference there.  To know you have a terminal disease, to be snatched unawares by some accident, to live in the shadow of war with Death your constant companion, these are more credible ends that are served by a more orthodox treatment.   But a story about living in the certain knowledge that your life will be taken by some as yet unknown murderer is, literally, incredible and it requires a special kind of style and skill to deliver such a tale.

Mercedes M. Yardley delivers through a light conversational narration that reminded me of the snippets of Lemony Snicket that I had read.  The omniscient narrator who delivers their tale with many an ooh and an ahh and a sharp intake of breath at the vicissitudes of life.  This is a narrator who does not so much tell you the story, or even read it to you, they stand over your shoulder and add a commentary as you devour Bryony Adams’ short bright life through the words on the page.  But whereas The Series of Unfortunate events had the palpable if multiply disguised figure of Count Olaf as its ever present villain, the growling hissing antagonist for Bryony Adams is fate itself, a fortune set at her birth that will not be denied.  Determination, the love of friends who want to buy her time in any way they can, and the spectacular inaccuracy of fate’s blunderbuss all combine to postpone what everybody in the book, including Bryony herself, has known is inevitable.  She can run, but she cannot hide, but my how she runs.

And for all the certainty laid out in its opening premise of a dark and unavoidable ending, this is a book that is joyful and life affirming.  What would any of us do in Bryony’s situation?  Seize what life offers? Fear for her friends who must be left behind to mourn.  Treasure each moment of now.

But, death stalks the book’s pages too, not just any death, but murder.  People die around Bryony Adams as the slings and arrows of outrageous fortune are loosed with devastating force but little precision.  There is no great titillation in each murderous act, merely a tiny detail here or there, a glimpse into each victim’s life or death that reaffirms the darkness of the shadow fate casts over Bryony, and by implication, over the many who love and care for her. The people who are determined to do all they can to give fate a damn good kicking and so buy Bryony whatever time they can.

There is a point in the book where one character reflects that he could cope with Bryony dying through some accident, through choosing just the wrong day to take up hangliding, or tripping and stumbling into a pit of rattlesnakes.  But it is the nature of her fate, rehearsed for us in advance by a variety of unfortunate victims of fortune’s inaccurate aim, which takes the theme of anticipated death and loss and gives it a sharp twist – well actually in a plot that wriggles as evasively as Bryony herself, it delivers quite a few heartstopping twists up to its long foretold heartstopping moment, and through those twists and turns the reader learns to love Bryony Adams just as much as the author did.

A book can be judged by many things and, incidentally, this book has an excellent cover. But like all art, a book is about interactions not absolutes.  Its quality is known, not by the mere words on the pages but by the response it engenders in the reader.  This is a book I read in just two sittings, its length, its pace and its story line sufficient to draw me in and on when sleep should have long since claimed me.  It is a book too, that left its mark on my mind, echoes of the story and the characters filling my thoughts the morning after so much so that I could not wait to try and capture some sense of the impression it had made through the medium of a review.  The last book to enthral me in the same way and linger on so powerfully after the last page was closed was “The Girl WithAll the Gifts” by M.R.Carey another enthralling heroine facing an impossible situation.

Why would anyone read such a book – a book haunted at every turn by murder and death, and again not just any murder but the vicious and sadistic theft of young women’s lives by a variety of persons unknown. And this is where Mercedes M Yardley strays beyond the reassuringly fantastic world of Lemony Snicket style writing and perches her tale right on the border of our own world, our real world, peopled by dark deeds and vulnerability.  The lyrical writing floats like a butterfly around dark realities of life and death and it is the style that saves both the story and the reader from engaging in a wholly macabre flirtation with darkness.

There may be others who will not warm to it as I did, who will not be swept along by its surrealist theme, its whimsical narration, or its captivating heroine.  There will be people who struggle to suspend their disbelief, or are uncomfortable with a book that flirts so lightly with murder and murderers.  But it is a unique story well told and I commend it.