My review of " Knife Sworn" by Mazarkis Williams

A story which envelopes and entrances 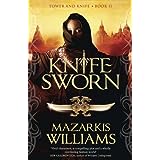 I had been struggling my way through books by two different writers.  Such towering figures within the genre that my travails of readership left me wondering "is it me?"  So I turned at last to Knife Sworn book two in Mazarkis William's trilogy and found at last a book that could have me turning the pages in eagerness to see what happened next, yet still determined to make sure I caught every word.

In the Emperor's Knife I had been intriged by the world Mazarkis had imagined - a Cerani Empire built on rigid hierarchies and the most absolute of absolute monarchies.  It had at once the air of mystery bound by threads so familiar they felt like strands of our own history.

In Knifesworn the world building is complete from a reader's perspective and the story plunges abruptly into themes of world destruction as the Emperor Sarmin finds threats of every kind assail him from without and from within to the point where even the one person he should be most sure of turns out to be the one most likely to betray him.

The theme of "the pattern" from the Emperor's knife is revisited and developed.  I liked the idea that there had been a kind of value in the way that the pattern bound people together in a collaborative entity which leaves some survivors bereft and lonely.    It put me in mind of my dim grasp of William Blake's railing against the imprisonment of man in the mental prison of his own individuality sampling the world through five imperfect senses.

The magic and the mystery are not laboured; Mazarkis Williams offers no lectures on her world's systems, no disconcerting authorial asides to the reader.  It is a story that you experience through the eyes and ears of its protaganists seeing and feeling only what they do.  You are swept along the narrative river and sometimes you might wonder at some feature that has flown by, but all the threads converge at the end.