The Most Achingly Beautiful Book I've Ever Read (Probably)

I picked up American Girl by Baird Wells (writing as Iowa Riley) in response to a social media post. I'd no idea really what to expect except that I'd read a couple of Baird's blogposts and been amusingly impressed by one and deeply moved by the other. 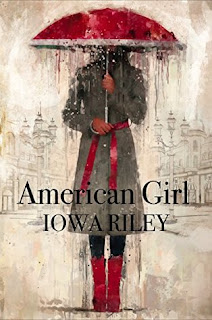 I have always loved trying to spot connections and influences that shape people's writing. Looking back now at those blog posts I see resonances then.

The first post was advice to men about talking to women at conventions. More specifically a ballsy blast of the trumpet of reproach in response to some male authors who think conventions are a phone free tindrfest - fingers raised to swipe left or right at every female face they see."how-to-talk-to-women-at-cons-probably"


The second post was a poignant reflection on friendship in the direst of adversity and what one can or should do with the time we have together."the-time-we-are-given"


Both those themes swirled soulfully together in this soft whirlpool of a story about a writer, Kate Archer, her career and her relationships. There is a point where one character claims in exasperation that the protagonist latest book is about him and Kate replies with the line and the thought

It's an astute (almost meta) comment on the struggles of writing in a book of and about writing and writers.

Life experiences - for good or ill - may be the fertile ground that fuels authorial imagination. But, despite that indefinable link between fact and fiction, the story that emerges is a different thing.  It is at its best - as in the American Girl - a beautiful and fragile thing way beyond any earthy origins in the soil of Riley/Wells' experiences.

This intimate first person point of view story follows Kate Archer through two different timelines. The present story begins in Portugal, the past story a year or so earlier, the one building to a point of earth moving crisis, the other reeling in the recurring aftershocks.

Braided through both past and present stories are the would-be lover Rob and the friend Natalie. The one is an author, gifted but insecure, craving reassurance as much as companionship, the purveyor of hackneyed lines like the ones that Wells brilliantly punctured in her blog post

"No One Has EVER Told Me I Have Beautiful Prose Before"

The other is that life long companion, the sister in all but name and blood, who has traded vulnerabilities, shared heartbreak and healed wounds since they were old enough to cross the street unaided.

In different ways these two key figures provide succour to Kate confined within an increasingly barren marriage more by habit and parental expectation than love or understanding.

This is a book about writers and writing, how the people and the craft interact and mingle.  Wells/Riley smoothly captures the heady holiday atmosphere of writing conventions represented here by an invented London Litfest; The easy creeping intimacy of conversations conducted over social media - confidences shared, borders skirted - or crossed. The opportunity through the internet to foreshorten geography so that people can be tempted to stray across continents without ever leaving their own homes.

But this book is not about the means or mechanisms by which relationships can be threatened or formed - it is about what happens next. As the onion layers of husbands and lovers, parents and friends are peeled away Wells/Riley shows us painful credible truths about people and how they can hurt and ultimately how they can heal.

She does with prose that is beyond beautiful - at times exquisite.  At every page turn with my kindle I found a fresh line to note and murmur acknowledgement at a idea so elegantly expressed.

This from the man who ... negotiated his way back to beer a night like a dog creeping onto an off-limits sofa.

"I am proud! but one of us has to come first, and I'm begging you to make the sacrifice." His eyes are wet and wide when he says this. He's not sorry for asking me to be less; he's sorry that I don't know I should be.

...acquaintances peer to decipher our body language but know better than to ask. They feel it too, the contagious rush, the amphetamine momentum of two people falling into trouble.

The red A-line makes a reappearance five years later. It's a bit more snug through the waist but nothing that has me reading Cosmo fitness articles.

There is so much about this book that appeals to me -

But it is the people, their flaws and foibles as colourful and fragile as butterflies that felt so real, that led me so ardently through their story and had me murmur oh my god, on more than one occasion.