A Marked Story - my review of "Ismark, the Marked boy" by JH Lillevik

I first met this story at an early stage in its development, when the author shared some initial thoughts and drafts with me and few other friends on social media.  I find it an exciting and privileged position to be able to see how the story has developed from its early stages to this final published novel. 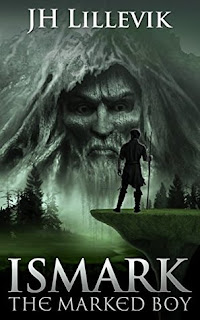 The story has many dark elements. We join Lillevik's eponymous hero Eirik the marked boy when he is a brutally mistreated slave in a mining community, part of the half conquered land of Ismark.  From there Eirik's life takes a series of turns for the worse in a succession of trials that would test the fortitude of a saint. However, Eirik survives where others do not, and finds spiritual strength in the midst of debilitating physical weakness. Sustained by dream-like memories of friends, relatives and homes he has lost, he strives to adapt to the challenges and opportunities of rapidly changing circumstances.

At 271 pages, the book is relative short for a fantasy epic and this allows it to start at a reasonable pace and accelerate rapidly as it approaches its shattering conclusion. I can see where some of the authorial excursions on those initial drafts have been trimmed back to allow us to get to grips more quickly with Eirik's journey - both in geographical and developmental terms.

The world building is intriguing. Various nations struggle against the might of the Sorian Empire, in its determination to subjugate the rest of the world through military or economic might. The Sorian's reminded me of many historical and fictional archetypes, most notably Rome, or ancient China. However, one particularly memorable character put me in mind of none other than Jabba the Hut from Star Wars.

The Sorians built their empire by stealing cities from a sophisticated dwarven civilisation and Lillevik leaves a few loose threads hanging, temptingly - to assure us that dwarves have a bigger part to play in Eirik's story than the magnificence of their architecture.

There are other characters too, besides Eirik and his immediate Ismarkian associates, that the reader will look forward to hearing more from: Master Cal - the inept Sorian merchant; Rhun - the Wrenian spy and his charming companion Amalie; Kef - the Sorian with friends in high places and swords with sharp edges.

Lillevik's writing is a little raw in places, and there is the occasional misplaced word or typo which a skilled editor's eye might have tidied up.  However, the story has at its heart the endurance and triumph of the human spirit. There were times, when I felt we were being told rather than shown the characters' experience of and reaction to adversity, but Lillevik's eagerness, in this his debut novel, is understandably to convey the shape and urgency of his story.

As E.M.Forster said nearly a century ago in Aspects of the Novel "The story... can only have one merit: that of making the audience want to know what happens next." Lillevik's story - with its nicely judged denoument - succeeded in that,