The knives are out but will Nysta get her man? (Review of "Duel at Grimwood Creek" by Lucas Thorn)

I read Lucas Thorn's debut book "Revenge of the Elf" a year and a half ago and reviewed it here. As I wrote then, Nysta's tale was both enjoyable and different. It was a reminder that the pantheon of self-published work includes both quality stories and diversity of approach. 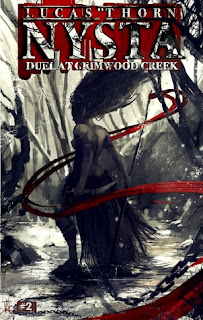 It has taken me a little longer than it should have to pick up the second part of Nysta's tale. There is a lot of reading (and writing) to be squeezed in the cracks and crevices between work and family life and there are a lot of books I haven't yet got round to reading.  For example another blood spattered revenge-quest about a feisty female who lost a male companion (Joe Abercrombie's "Best Served Cold") sits amongst many others in the stack on my bedside table waiting for me to find the time the story deserves.

To be honest one reason for my delay in returning to Nysta was that the first book did not close the story circle of "atrocity committed" and "vengeance secured" and I was not sure how many more books it might be before Nysta's hurt (like her enemies) could be considered truly buried.

So the first thing to be said is that Duel at Grimwood Creek completes the story begun in Nysta Revenge of the Elf.  It does so in much the same way and with a similar amount of blood and violence as Tarantino's "Kill Bill 2" completed the story begun in "Kill Bill".  Thorn's own author's note makes the point (and I do love the insights an authorial note gives you). This book is the second half of the first book...I split the book into two for a simple reason. size. One reviewer of my own work criticised Lady of the Helm (book one of the bloodline trilogy) because it "just ended." I was left wondering if Tolkein had the same kind of complaints about the ending of "The Fellowship of the Ring."  In those circumstances, I should have had more faith in Thorn and returned more quickly to Nysta's tale.

Another observation is just how much I am reading electronic books now more than physical books. The convenience of a backlit kindle screen for night time reading when everyone else is asleep (or wants to be). It is like being a child again reading by torchlight under the bedclothes long after the official "lights out."  I consumed The Duel at Grimwood Creek very easily a chapter or two at a time in those moments between the end of one long day and the rest needed for the start of another.

Thorn's writing retains the same edginess (pronouns strictly optional) but he also conjures up some vivid images through his descriptions and the dialogue is as sharp as Nysta's favourite knife (named A Flaw in Glass).  I bookmarked several lines, these two amongst them.

A thick line of grey cloud swept its belly over the cliffs.

"(He) died the second he planted a knife into the only man I ever loved. Just took a while for him to stop breathing was all."

Thorn does enjoy discovering puns - at one point when threatened by howling wolf like creatures called draugs, Nysta tells Chukshene "I reckon you're about old enough to know how to say no to draugs"  In Revenge of The Elf, some found the pun-peppered text with to be a little overseasoned such that it intruded on their reading pleasure, but I was fine with it.

The story picks up where Revenge left off, with Nysta and her side-kick Chukshene the warlock ('lock for short) hot on the trail of her husband's killers. Nysta has been changed and yet is the same by the climax of book one - as Chukshene describes it she is still "an ill-tempered bitch." The ramifications of that invisible transformation will doubtless carry Nysta on into further adventures and books. For the moment however, the ill-matched pair travel on a road movie through a desolate landscape, overhauling Talek's murderers one bloody nine at a time.

Thorn conjures up some bizarre imagery for his world ruined by a war between gods.  There is a richly built world lurking beneath Nysta and Chukshene's violent escapades, but it has the decency to appear only when required by the plot - rather than in tedious infodumps.  While this does leave the reader feeling like a traveller in an alien land - that's the kind of experience I want in my fiction. If I liked infodumps I'd read an encylopedia.

Thorn's creativity conjures up a walled castle straight out of a nightmare - leatherface from the Texas Chainsaw Massacre would have struggled to imagine it, though I expect he would have appreciated it. When an elf walks into a bar - well it isn't going to end well. Most bar room brawls are battles of the many against the many, but Thorn writes a simpler tale of one against many in the bloodiest brawl since Clint Eastwood walked in on Gene Hackman in "Unforgiven."

And there is something of the old west in Thorn's story - an intention he set out for and I think achieved. When Nysta finally comes face to face with her foe it could have been scripted by Sergio Leone, one can almost hear the musical pocket watch from the denoument of "For a Few Dollars More" And, just as with that particular western, we discover there is a history to the emnity between Nysta and her quarry, a hatred rooted in the past that runs deeper than the death of a beloved husband.

So, Duel at Grimwood Creek brilliantly concludes the story that began in Revenge of the Elf.  Yet, like all good stories it sows seeds of a sequel, mysteries that arose as side-plots in the course of Nysta's quest for revenge and which - I am sure - are fully explored in the following books.

I must also give a shout out to the free short story about the small band of goblins from the longrunners tribe thrown into the book after the author's note.  In T.S.Elliot's "Old Possum's Practical Cats" there is a long poem about the significance of the naming of cats and the multiple titles each feline must bear.  In Thorn's world, the naming of goblins is a much simpler affair with tribe leaders being called "Bossyou" or "Bosslots" but naming is still a cause for argument as in this exchange.

"I Rummage, Broketoof Mob."
"Rummage," Spitblood said, wiping his stumpy nose with the back of a finger. "That most stupid name ever."
"He namefucked," agreed Onespud.

Still, if your tribe is called longrunners, it must say something about you and Bossyou and his bunch's brief adventure in the mushroom forest is a very entertaining read and further proof that there is much more to Thorn as a writer (and to Nysta as a character) than an F-bomb laced killing spree.