Back in January of this year Goodreads tempted me to set a target for books read this year. In the spirit of continuous incremental "improvement" which has dominated my working life in education in the UK, and in homage to Hitch Hiker's Guide to the galaxy, I promised myself I would read 42 books in 2015, one more than the 41 I clocked up in 2014.

It is now late August in a year dominated by exceptional work and life pressures, we are nearly two thirds of the way through the year and I am barely one third of the way to my target with 15 books read.  Other targets are also creaking under the strain. 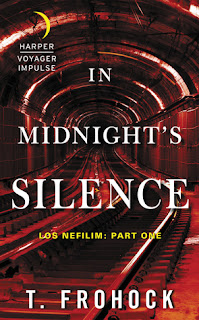 So, in the midst of these pressures "In Midnight's Silence" - the third work of Teresa Frohock's which I have read - is most welcome.  As a very readable and self-professed novella, it is a book precisely aligned with my target driven needs.  (Next up maybe "The Slow Regard of Silent Things" and after that I'll start re-reading and reviewing the children's books I used to read to my daughters.  No kidding, "Amy Said" is a classic work of fiction - while venturing an opinion on the Mr Men books might significantly lower the average star count of the ratings I have given.)

But, let us hasten to the world of Diago and Miguel lurking on the fringes of the Spanish Civil War.  Like Frohock's other works it mixes the familiar and the supernatural.  A perilous maelstrom of angels and daimons hovers beyond human perception making jagged intrusions into (and extrusions from) a world we would recognise as totally normal.

I have recently watched Insidious and Insidious 2 - horror films where it is people not houses who are haunted by beings from beyond their world.  In 1930s Barcelona, Frohock paints a similar picture of a dark other world swirling beneath the thin ice on which our own existence rests. However, with its detailed historical reference the atmosphere is more akin to those glimpses I have seen of Pan's Labyrinth than to contemporary American based horror films.

In Miserere and The Broken Road, Frohock kept the worlds more separate than "In Midnight's Silence" Here the dark and the normal are intertwined like strands in a braid and walking with Diago on the foggy streets of Barcelona every dimly perceived street corner is approached with the utmost caution.

It is beautifully written, though it's length gives little time for elaborate world building.  That makes the experience of reading it more visceral, we ride in Diago's head - for the most part - and we see only what he would notice, watch what he does, hear what he thinks, but all without tedious exposition.  Those who hanker after spell systems and education might better attend Kovthe's alma mater, but others will savour the experience of experiencing Frohock's dark flickering world.

There are other themes in this book, of love and fidelity. Diago and Miguel are a couple, their love for each other described with the same simple tenderness afforded to hetrosexual couples in fantasy literature.  Frohock has written her heroes as heroes who happen to be gay, rather than heroes either because or in spite of their sexuality. It is an absorbingly believable description, though it might deny her a place on any future sad puppies' slate - but then - who would want to be on such a slate anyway?

As in the Broken Road, Frohock imbues song with a power more deep than mere entertainment. It is a means through which spells are cast, power revealed and evil can be conquered and it is an interesting development of the usual finger twirling with which incantations are delivered. There is also a train and a train station, though this is no Hogwart's express puffing away at platform 9 and three quarters.  And its destination is no magically enhanced Enid Blyton boarding school experience.

I recently read a short story in the Fantasy Faction Anthology called "The Dealer" by Miah Sonnel.  Sonnel's work shares with "In Midnight's Silence" a notion that Angels and Demons are both terrible beings.  They are after all involved in a war and humans are exposed to collateral damage, our world is the battlefield not the place they seek to protect.

Los Nefilim are a secretive group that Miguel works for. Diago knows them as any lover might know his partner's workmates but, for himself, he finds that being immortal does not exclude you from the tedious business of earning a living.  For one who loves music in all its powers there are moments of torture in delivering lessons to the tempestuous young and moments of amusement - for the reader at least - in watching him deal with parental pressures.

I found Frohock's use of the sub-title los nefilim a linguistic tease.  Having been foiled in my assumption it was latin, google translate turned the Spanish into English (nephilim) and Wikipedia gave me this

The nature of the nephilim is complicated by the ambiguity of Genesis 6:4, which leaves it unclear whether they are the "sons of God" or their offspring who are the "mighty men of old, men of renown".

Well that ambiguity fits the protaganists of Frohock's book who are certainly men of power and antiquity embroiled in a hidden war. This is the first book in a series, a story complete in itself which nonetheless introduces us to characters and conflicts we can follow onwards and upwards (or downwards).  I look forward to watching the work of Diago, Miguel and Los Nefilim as their own shadowy world shadows arguably the darkest period in the twentieth century.