Happy Self-Publishing Birthday to Me

I started this self-publishing adventure on 11th June 2013 when Lady of the Helm took its place on the electronic shelves of Amazon's KDP select programme.  As that anniversary approaches, it seems like a good point at which to reflect on what I have learned and how.

But let's start with what you are all interested in.  What are the figures?

It will surprise few who know me well to discover that there is a spreadsheet of the sales figures on a monthly basis, with different lines on the graph for the different markets that Amazon operate in. 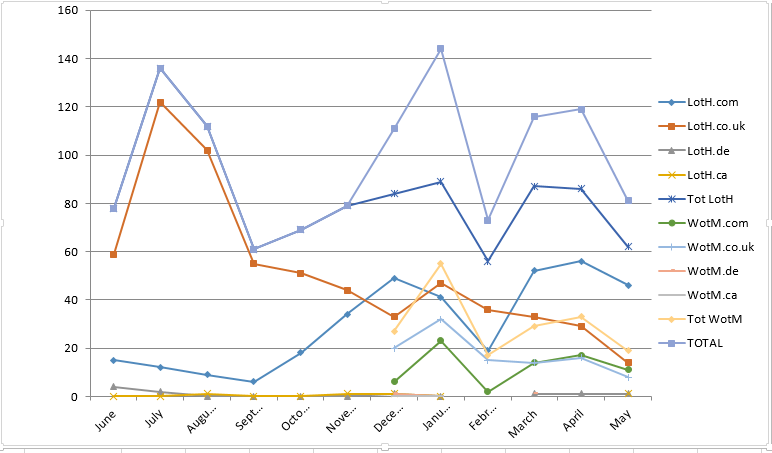 The peak in July and August came on the back of a 264 book giveaway - though it might be unwise to assume a causal relationship between the two.  Lady of the Helm is priced at 77pence.  The received wisdom on the KDP commuity is that I might get more sales and greater credibility by having the confidence to put it on at a higher price.  Certainly Wrath of the Medusa with fewer sales but a higher price pitched to capture the 70% royalty earnings has earned me more money than Lady of the Helm.  But for me the main thing is still getting the books out there and cultivating a readership.

The book was a slow burn in the states (the amazon.com website) but now .com sales are consistently outstripping .co.uk sales.

And the other question, how much have I made, can I retire yet?  The short answer is an obvious no.  The few hundred pounds I have raised just about take me to break even point with the cost of my covers and other expenses (courtesy of the wonderful Paganus).  It was salutary to discover that Mark Lawrence, for all the success of the Broken Empire series is still a part-time writer with a demanding day job.  It will be some time and many many sales before I can tweet like Joe Abercrombie does about dilemma of which flavour of poptart to choose before settling down to a gentle morning at the laptop.

However, I heard somewhere and (because it suits my ego) I am happy to believe it that the "average" book sells 3000 copies total.   For a self-published book launched with minimal fanfare and little more publicity than a few websites and word of mouth, I am quite pleased with how it has gone so far.

Read on if you want to hear more of the highs and lows of a year in the self-publishing business.

Or here is the TL:DR summary


Maintaining an internet presence to market your book is not hard, just dangerous.  It can be such fun that it draws you into endless procrastination when you should be writing.

Reviews maketh the book - I love the reviews I've got, I wish I could have more.

Interacting with readers who love your book is a great pay off for the long hard slog of writing.


High spot one: the first review - the man from Uncle

Amazon is very careful about authors self-reviewing and I have never understood how people seem to be able to generate what must surely be sock puppet reviews.  My first review came in on the 16th June.

What a beauty.  For a long time that gave me an average rating of 5 stars and a fairly high up position in the sorting of recently published epic fantasy.  I am sure that helped the July and August sales.  Having lived with only my daughter's approval and interest for so long there was nothing quite like finding out that someone I didn't know really liked my book.  It was a bit of a Sally Field moment for me.

High spot two: making it into a top 100 list

There was a day in July when as a family we went to see The Tempest at the Globe Theatre.  Assiduously checking my sales figures on my phone it seemed that every hour brought a new sale and, sure enough, when I got home, the amazon sales algorithm had got me into a top 100 category and a sales ranking of under 4000 out of over 2,000,000 titles.  That one sale an hour or so had catapulted me briefly into the top 0.2% of titles on Kindle.

After that the rankings hovered below #10,000 for a while and then below #20,000.  Now they tend to be somewhere under #100,000 and I have lost my OCD tendency to check the ranking all the time.  Sales and reader feedback are my current obsession.

The whole self-publishing experience through Amazon had been astonishingly easy.  Upload the cover, upload the word file, it had even done a spell check for me.  And on top of that KDP offered me access to a community of self-publishing authors.  In the early days of June, July and August that was where I went for all my publishing advice and support.  The people there were lovely and certainly helped when I got to my first low spot.

However, it is an authors' community and like many newbies there I struggled to see how or if I could market my book there.  It's a bit like going into the local Indian takeaway and offering to make them a chicken korma.  I did make one sale, my first on the Canadian amazon.ca site, mainly because one of the forum members was so entranced by the English cricketing idiom "breaking my duck"  (as in moving off a score of zero) that they kindly broke my Canadian duck for me.

What the forum did show was the huge range in self-published authors and also the slightly weary "it used to be so much better but the bubble has now burst" from the more established members.  It was a bit like the Monty Python four Yorkshiremen sketch.
"Aye, when I were a lad if you did a KDP free giveaway, you'd get 20,000 downloads in the first hour and 4000 of them would give you a review within the first day, and then your sales ranking would shoot up to #1."

I was on holiday in a French campsite in August trying to write the second part of book two as well as fulfil family commitments to the pool and the slides.  A casual check on Amazon revealed a 2 star review by someone whose high expectations of the book had been disappointed, though she did admit it might work for others.  I was gutted.  I was paranoid that my sales, buoyant on an average 5 star rating, would now crumble.  That Sally Field moment of the first positive review had its precise opposite.  I went to bed and wrote nothing all day.   But then my second daughter told me exactly the same thing had happened to her in her fanfiction writing and the KDP forum told me everybody gets them and you just don't respond. And what the hell, the reader is entitled to their opinion.  So I moved on.

As you may be able to tell from the chart earlier, September 2013 continued a declining trend and remains my lowest month for total book sales.  61.  Was this the inevitable decline?  Had the little bubble burst?  The forum offered conflicting advice and experience.  Some authors reported buoyant sales, others had figures far worse than mine.  Still, it was a relief when October turned out to be better than September.

Around about this time I joined twitter and created a facebook presence for T.O.Munro and started pursuing the kind of internet presence that all the forums seemed to be talking about.  Marketing was difficult but essential they said, marketing was harder than writing, get out there and find your readers but don't appear on forums and immediately declare your authorship and spam your book at everyone.

I joined a variety of groups some of which, lamentably I have done nothing more than delete the daily update email they send me.  Others have been more inspirational and/or supportive.  The short story competitions at Fantasy-faction gave me a great excuse to fill in the backstory to Lady of the Helm in bite sized chunks.

I was particular struck by the ease and accessibility of authors in the internet age, none more so that Mark Lawrence - author of the Thorns trilogy and Prince of Fools.  Tweets, blogs and competitions seemed to be the way to go.  I entered one of Mark's competitions and this remains my favourite entry in one of his many competitions - all done with nothing more sophisticated than paint. 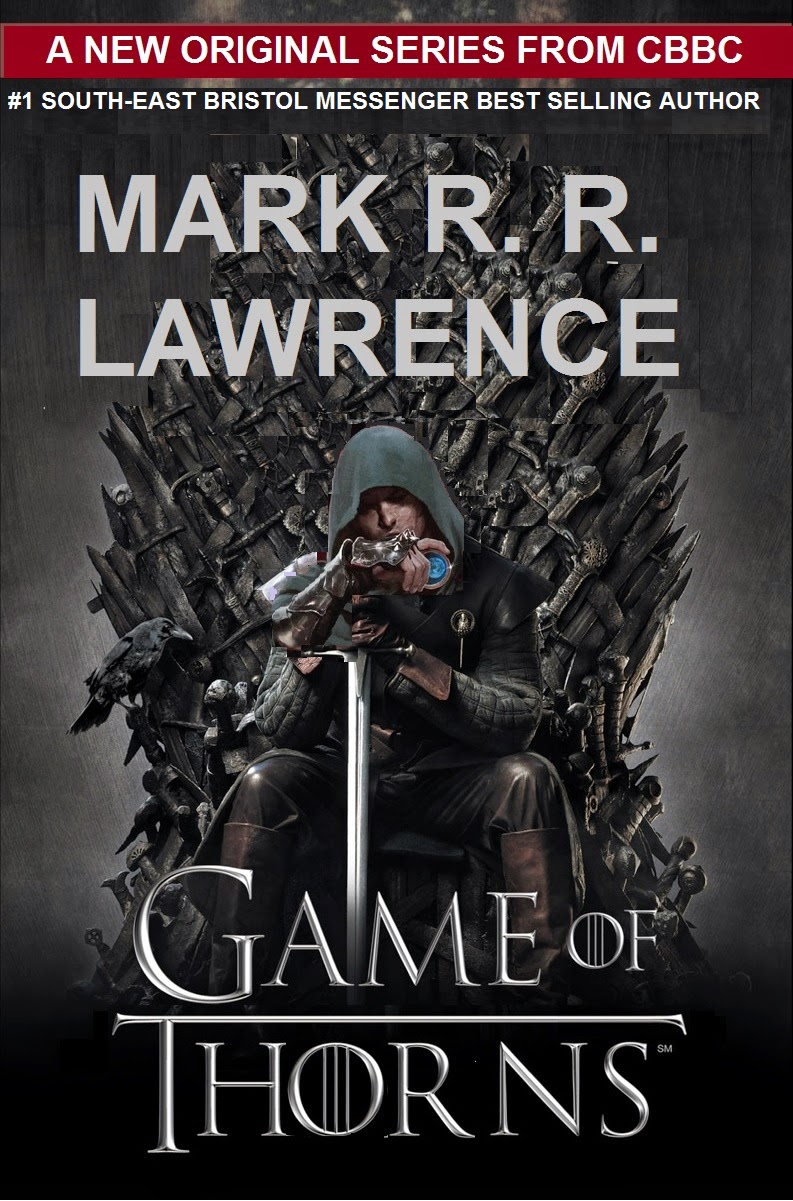 I had avoided Goodreads for a while.  The feeling on the KDP forum seemed to be that it was populated by bullies who filed the books of self published authors on offensively titled shelves.  However a twitter follower lamenting that he could not find my book on Goodreads prompted me to join as a Goodreads author.  I promptly received a favourable review and a first fan from Goodreads and a great review which he copied over to give me my first amazon.com review - and incidentally probably kick started the US sales that had been dawdling somewhat compared to the UK sales.

High spot six - Book two comes out, and I get an interview.

Wrath of the Medusa was launched in December and got some positive feedback.  The nature of the story is very much a three part epic so there were several readers anxious to see what happened next.  I joined a newly set up authors' network, the Self-publishers showcase and got to do an interview as well as an author's page.  They made a bit of a splash for the launch of Wrath of the Medusa.  I pitched the price higher and, in line with KDP forum advice, I avoided the free giveaways.  Sales were slower than Lady of the Helm, but income was higher.

I won my first Mark Lawrence Competition which was to do a reading of his short story Select Mode  which could be posted on sound cloud. Fun as it was to read a short story in the voice of Jorg Ancrath, Mark also kindly suggested I read an excerpt from Lady of the Helm at the end of the story.  That netted me another reader whose curiosity about the story mastered his scepticism about self-published books and I got another great goodreads and amazon.com review.  I also discovered reddit and got feedback from Michael J Sullivan, a stalwart in the close and supportive community of fantasy authors, traditionally published, self-published and hybrid.

Then, on top of this I was invited to be one of a panel of judges on a bloody cake news short story competition  in some very illustrious traditionally published company.


So, at the end of it all I am pleased with how my books have sold and how their internet presence and public awareness is gradually developing.  Virtual book shelves are infinite in length so, unlike a bricks and mortar bookshop there will never be a need to take my books down to make way for the next bigger better seller.  In the meantime I am content to get on with writing the concluding book of the trilogy, and hope that word of mouth and maintaining a modest marketing presence will enable my readership to continue to grow.

The greatest pleasure is in the comments from readers who want to know how Niarmit's story concludes.